I love Victoria Aveyard's Red Queen series and can't wait for the King's Cage to release in February. This trailer has made me even more excited so I had to share it on here for anyone who hasn't seen it yet! 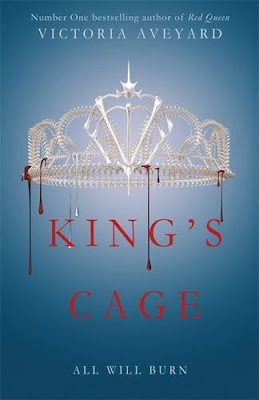 Mare Barrow is a prisoner, powerless without her lightning, tormented by her mistakes. She lives at the mercy of a boy she once loved, a boy made of lies and betrayal.

Now a king, Maven continues weaving his web in an attempt to maintain control over his country - and his prisoner.

As Mare remains trapped in the palace, the remnants of the Red Rebellion continue organizing and expanding. As they prepare for war, no longer able to linger in the shadows, Cal - the exiled prince with his own claim on Mare's heart - will stop at nothing to bring her back.

In this breathless new novel from the bestselling author of the Red Queen series, blood will turn on blood and allegiances will be tested on every side. If the Lightning Girl's spark is gone, who will light the way for the rebellion?