Review: The Bear and the Nightingale - Katherine Arden 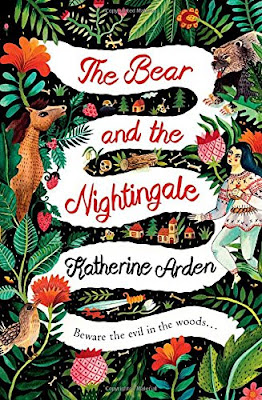 At the edge of the Russian wilderness, winter lasts most of the year and the snowdrifts grow taller than houses. But Vasilisa doesn’t mind—she spends the winter nights huddled around the embers of a fire with her beloved siblings, listening to her nurse’s fairy tales. Above all, she loves the chilling story of Frost, the blue-eyed winter demon, who appears in the frigid night to claim unwary souls. Wise Russians fear him, her nurse says, and honor the spirits of house and yard and forest that protect their homes from evil.

After Vasilisa’s mother dies, her father goes to Moscow and brings home a new wife. Fiercely devout, city-bred, Vasilisa’s new stepmother forbids her family from honoring the household spirits. The family acquiesces, but Vasilisa is frightened, sensing that more hinges upon their rituals than anyone knows.

And indeed, crops begin to fail, evil creatures of the forest creep nearer, and misfortune stalks the village. All the while, Vasilisa’s stepmother grows ever harsher in her determination to groom her rebellious stepdaughter for either marriage or confinement in a convent.

As danger circles, Vasilisa must defy even the people she loves and call on dangerous gifts she has long concealed—this, in order to protect her family from a threat that seems to have stepped from her nurse’s most frightening tales.

Review:
Every so often a book comes along that is so good it just blows your mind. In 2014 it was Red Rising, 2015 was Uprooted, in 2016 it was Nevernight and I know it's early to say this but for 2017 it's The Bear and the Nightingale. These are the kinds of books that I actually get anxious about writing reviews for because I know I'll never be able to do them justice. They're the books that I end up buying multiple copies of, books that I walk around bookshops surreptitiously moving them into more prominent places on the shelves and books I start physically handing to random strangers. Basically if you're going to buy one book a year based on my recommendations these are the ones I would push at you.

This is the story of Vasya, the youngest daughter of Pyotr and Marina Vladimirovich. Her mother died just after giving birth to her but Vasya is doted on by her older brothers and sister and she has a wild streak a mile wide. Vasya is a quite a tomboy who would rather spend her time running in the forest or in the stable looking after the horses than indoors learning to cook and sew, she also inherited her mother's second sight and spends her time communicating with the guardians and spirits who look after the land. She isn't afraid of the strange creatures she finds, in fact she befriends most of them and does her best to help them stay alive when the rest of her village start to turn away from them. As Vasya gets older her father begins to worry that she'll never find a husband if she doesn't start to act like a proper young lady so he remarries hoping his new wife will be a good influence. Unfortunately things don't quite work out as planned and when another new arrival appears in the village things just go from bad to worse.

The Bear and the Nightingale is part historical fiction, part fantasy and all magical fairytale. It's beautifully written and highly atmospheric, the perfect book to read on a cold winter's night when you're wrapped up snuggly by an open fire and sipping from a mug of hot chocolate. Katherine Arden weaves a tale so evocative that you'll feel like the world around you is blanketed in snow and you'll be half tempted to leave out an offering of bread and honey for the hearth-spirits in your kitchen. There are so many things I want to say about this book but I find myself lost for words, it really is just the kind of lush story that you have to read for yourself to fully appreciate. I was utterly obsessed when I was reading this, I didn't want to put it down for a minute and I'm already anticipating a reread before the sequel comes out. It's hard to believe that this is actually a debut novel but Katherine Arden has earned a spot on my auto-buy list and I can't wait to see where she takes Vasya's story next.