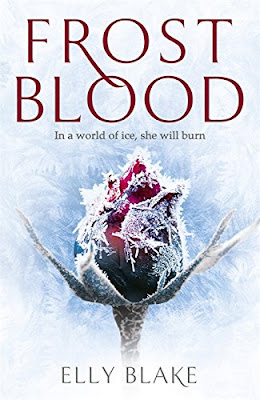 In a land governed by the cruel Frostblood ruling class, seventeen-year-old Ruby is a Fireblood who has spent most of her life hiding her ability to manipulate heat and light - until the day the soldiers come to raid her village and kill her mother. Ruby vows revenge on the tyrannous Frost King responsible for the massacre of her people.

But Ruby's powers are unpredictable...and so are the feelings she has for Arcus, the scarred, mysterious Frostblood warrior who shares her goal to kill the Frost King, albeit for his own reasons. When Ruby is captured by the Frost King's men, she's taken right into the heart of the enemy. Now she only has one chance to destroy the maniacal ruler who took everything from her - and in doing so, she must unleash the powers she's spent her whole life withholding.

Frostblood is set in world where flame and ice are mortal enemies - but together create a power that could change everything.

Review:
Ruby is a Fireblood, someone with the ability to control heat and fire. Unfortunately she's not had much opportunity to practise her skills because her people have been so persecuted by the Frostbloods (people with control over cold and ice) that she has to keep her nature secret. Unfortunately Ruby is discovered by the Frost King's soldiers when they raid her village and her mother is murdered in front of her. Ruby is consumed by the desire for revenge but in order to achieve her goals she finds herself having to work alongside a mysterious and scarred Frostblood soldier. Arcus should be her enemy but he has reasons of his own to destroy the Frost King and a gradual truce forms between them as he tries to help her master her powers.

On the surface Frostblood sounds very similar to a lot of other YA fantasy series out there and I'm not going to lie those similarities are real, however, it also stands up as a story in it's own right and I found myself really enjoying it. Ruby is a great character, she's been through a lot but she is quite fierce and determined when she sets her mind to something. She spent her whole life being told she had to hide her abilities so it's quite difficult for her to embrace her skills at first but she perseveres and is willing to to put the effort in so it doesn't feel like everything comes to easy for her. It was fairly obvious from early on that Arcus was going to end up being a love interest but it wasn't a case of insta-love. They were initially wary of each other but over time they developed a grudging mutual respect that eventually turned into friendship.

Arcus was keeping a lot of secrets but I had guessed his true identity fairly early on. I liked the way Ruby reacted when she found out, she was shocked and her first instinct was to wonder if he had betrayed her but then she thought about things like a sensible person and realised that was still able to trust him after everything they'd been through together. Too often we see characters easily believe rumours over their own experiences with a person so that was a refreshing change.

Although the story started out with a similar feel to several other series Elly Blake definitely takes things in her own direction during the second half and I was actually surprised by the way it ended. I think I was expecting it to end on some horrible cliffhanger so I was really pleased that wasn't the case. I like that this ties together and feels like a complete story in it's own right. There is definitely more story to tell and I'm looking forward to getting my hands on the next instalment but we do get a nice amount of resolution to some parts of the story. This series is definitely going to be one to watch out for, I have a feeling it's going to be a big hit!