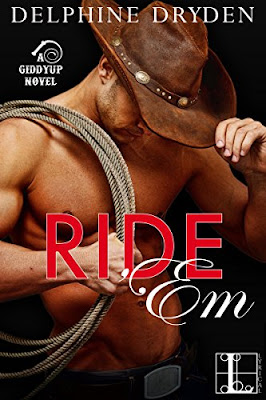 SADDLE UP
Mindy has come to Logan’s dude ranch to convince him to sign away his land’s mineral rights to her stepfather. She doesn’t want to beg, but she will if she has to, like she does Friday nights when she submits to her master’s desire . . .

BUCKLE DOWN
Logan doesn’t like to be jerked around, in business or pleasure. And when he learns what Mindy is up to, he’s ready to teach her a lesson. In fact, he’d like to tie her up, strip her down, and give her a spanking she’ll never forget . . .

Review:
Mindy booked a week's holiday on a ranch in her hometown for one reason only: to convince Logan, a guy she went to school with, to sell the ranch mineral rights to her stepfather's company. She wants her stepfather to see that she is good at her job and he's not exactly giving her many other chances to prove herself. Logan is thrilled to have his childhood crush staying with them and the attraction he feels hasn't been dulled by the years they've spent apart. He's not happy when he finds out why she came though and sets out to teach her a lesson for lying to him. As Logan ties her up in knots Mindy starts to realise that she's had her priorities all wrong but can she prove to Logan that she's now on his side when her stepfather comes to town and starts throwing his weight around?.

I was a bit worried that Mindy's secret would be hanging over their heads for most of the book so I was relieved she was found out pretty much immediately and that she'd already decided she'd made a mistake in trying to trick Logan. She never lies to him and she is quick to apologise and try to make amends which I appreciated. Mindy spent so long desperately trying to get away from her small hometown and make a new life for herself in Dallas that she's shocked by how right it feels being back in Bolero. Then when she realises that Logan is also into the kink scene things just fit together but she's still scared to make the leap.

Logan is a hardworking guy who just wants to make a success of his family's ranch. It's been hard work starting the business and he's up to his eyes in debt but he's determined to turn a profit and get the bank off his back. He always had a crush on Mindy but while he was a geeky teenager she was the homecoming queen and he never stood a chance. Now she's back but he's worried about scaring her off with his kinky side. When he realises she's a sub and shares all the same kinks as him he knows they could have something special but with her stepfather determined to destroy his land it's hard to trust that Mindy isn't still secretly working against him.

Cowboys and BDSM, who knew that would be such a recipe for success? Well actually when you think about it kinky cowboys seems like a bit of a no brainer, I mean who wouldn't want to read a series ? I'd forgotten how much I enjoy Delphine Dryden's writing, I loved her geeky hero Ivan in The Theory of Attraction and she's proved she's just as good at creating alpha cowboys with Logan. Ride 'Em was everything I'd hoped for, it had some very sweet and funny moments, a great cast of side characters, a believable romance and some hot as hell kink. Logan's brother Ethan is up next and since he's a rope expert I have very high hopes for his story too and I can't wait to continue this series.