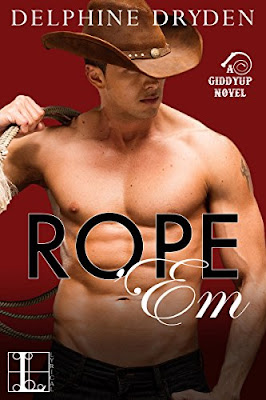 TIED UP
Returning home to help out with his brother’s dude ranch is cool with Ethan. After all, he’s as comfortable in the saddle as he is roping a calf. But what’s really jangling his spurs is a chance to indulge his kink in the ranch’s monthly Giddyup event. Did someone say suspension bondage? Yee-Haw!

TEASED
When Victoria realizes her family’s number one goal in sending her to college is to get her hitched to a husband, she drops out one semester shy of graduation. But paying her own way turns out to be the hardest lesson of all. Thankfully she’s found her way to the Hilltop Ranch. A place to get away and refocus. And get herself all tied up . . .

TAKEN
Sure, Ethan’s pretty handy with that length of rope. But it turns out the expensive design school wasn’t a total waste for Victoria. Bringing an “academic” approach to their play—and Ethan’s hobby—is opening up new possibilities. Like maybe the chemistry between them is something more than a game . . .

Review:
Victoria has it all - a nice apartment, a place at a good college studying design and she's even been lucky enough to experience some fantastic internships to gain experience in the field she wants to work in. It all comes tumbling down around her when she overhears her father complaining about how much it's all costing him and how he had expected her to have hunted down a potential husband by now so he wouldn't have to continue supporting her forever. Victoria takes immediate action to become completely independent, dropping out of college one semester shy of graduation and taking low paid jobs to try and earn enough to cover her rent. It's only then that she starts to realise how sheltered her life has been and how little real life experience she actually has. Luckily for her she's been able to land a job at the Hilltop Ranch that includes food and board so now she'll have a little breathing room as she tries to decide what she wants to do with her life now.

I knew I was going to love Ethan after meeting him in the first book, he's such a fun guy, someone who loves to have adventures but who is also very settled in his career as a vet and helping to run the family ranch. Ethan is also part of the kinky community that love to play at the ranch's monthly BDSM Giddyup events, he's the resident rope expert and he's looking forward to the demonstration he has coming up at the next event. The last thing he needs is to get stuck babysitting the useless new staff member, someone who can't even figure out how to clean the bathroom without being given full instructions. He initially sees Victoria as a spoiled rich kid with no life skills but the more time he spends with her the more he realises that she's actually a hard worker who wants to learn but has never been given the opportunity before. There's no denying the chemistry between them and when he finds out that she's also a member of the kink community he finds her impossible to resist.

I have to admit I wasn't a fan of Victoria in the beginning, I took a pretty similar view of her that Ethan did and I was annoyed with the way she just dropped out of college so close to graduation in what came across as a bit of a childish tantrum. Don't get me wrong I admired her for wanting to stand on her own two feet and be independent and I definitely didn't agree with the way her family treated her but I was annoyed that she'd been given so much privilege and basically threw it all away. It's reminded me of that old saying about not cutting off your nose to spite your face! I was a bit nervous at that point because I find it very hard to get on board with a romance novel if I don't like one of the main characters but I'm really glad I stuck it out because it didn't take long at all for Victoria to start to turn things around. She really didn't have a clue about pretty much anything but she fought through her embarrassment to ask for help and advice when she needed it and it takes a lot of courage to do that.

I ended up really enjoying Rope 'Em, Ethan and Victoria have brilliant chemistry but they also work together well and built up a strong friendship. The kinky play was hot but nothing too over the top and I also enjoyed getting to see characters from the previous book. This series is definitely one I'm happy to recommend and I'm really looking forward to spending time with Ethan and Logan's cousin Chet who I'm pretty sure will be the hero of the next book.