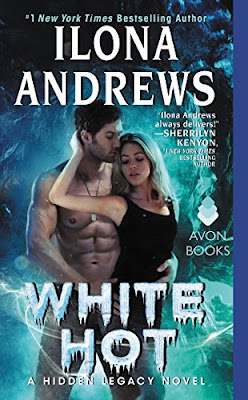 The Hidden Legacy series by #1 New York Times bestselling author Ilona Andrews continues as Nevada and Rogan navigate a world where magic is the norm . . . and their relationship burns hot

Nevada Baylor has a unique and secret skill—she knows when people are lying—and she's used that magic (along with plain, hard work) to keep her colorful and close-knit family's detective agency afloat. But her new case pits her against the shadowy forces that almost destroyed the city of Houston once before, bringing Nevada back into contact with Connor "Mad" Rogan.

Rogan is a billionaire Prime—the highest rank of magic user—and as unreadable as ever, despite Nevada's "talent." But there's no hiding the sparks between them. Now that the stakes are even higher, both professionally and personally, and their foes are unimaginably powerful, Rogan and Nevada will find that nothing burns like ice . .

Review:
I do not have the words to say how amazing this book is, honestly 5000 stars would not be a high enough rating! If you enjoyed Burn for Me you aren't even going to know what to do with yourself after you finish White Hot, it left me absolutely desperate for Wildfire so its a very good job that they're being released so close together.

I loved every single minute of this story, the chemistry between Rogan and Nevada blows my mind, let's face it EVERYTHING about Rogan hits my hot spots - there wasn't a scene with him in it that didn't have me swooning and fanning myself! He's an intense, brooding, full on alpha male who is as hot as Hades and has a slightly vulnerable squishy centre that you only spot if you look hard enough.

The world building was great before but OMG there is so much more to discover in this book, about the different kinds of magic, about Nevada's abilities and her family history, about the crazy magical creatures that can be pulled out of the arcana and even about the way the different Houses handle their disputes. I have to say that Ilona & Gordon Andrews write the BEST female characters and families you'll ever come across. Nevada is so strong and kickass but she still has a lot to learn about herself and her magic and I love getting to discover what she's capable of right alongside her. Her sisters and cousins get their chance to shine in this book and I'm really curious to find out more about all of their different magical abilities in the future. I also loved the addition of Cornelius to the main cast of characters, his animal sidekicks are wonderful and the ninja ferrets are utterly priceless.

White Hot has everything you could hope for: fun family banter, amazing chemistry between Nevada and Rogan, enemies who always seem to be one step ahead and who are willing to pull out all the stops to hurt our heroes. You'll be shocked one moment and swooning the next only to be watching in terror seconds later as you worry that all your favourite characters might not survive their latest adventure. One thing I guarantee is that you'll want to go back to the first page and start all over again the minute you finish it. I've already read it FIVE times and it's not even been published yet! I think it's safe to say that I'm addicted to this series, Ilona and Gordon were already my favourite authors but this series takes them to a whole new level and my obsession knows no bounds.

I'll leave you with a couple of my favourite quotes just to whet your appetite further:

A tall man was striding from the far end of the hallway. He wore the black robe and it flared around him, the wings of a raven about to take flight. He walked like he owned the building and he'd spotted an intruder in his domain. Magic boiled around him, vicious and lethal, so potent I could feel it from 30 yards away. He wasn't a man, he was an elemental force, a thunderstorm clad in black about to unleash its fury.

I finally understood why he was called Mad Rogan. It wasn't because he was insane. It was because he drove you nuts with sheer frustration.