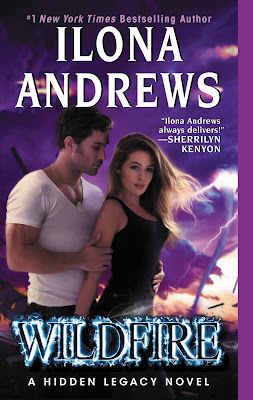 From Ilona Andrews, #1 New York Times bestselling author, the thrilling conclusion to her Hidden Legacy series, as Nevada and Rogan grapple with a power beyond even their imagination…

Nevada Baylor can’t decide which is more frustrating—harnessing her truthseeker abilities or dealing with Connor “Mad” Rogan and their evolving relationship. Yes, the billionaire Prime is helping her navigate the complex magical world in which she’s become a crucial player—and sometimes a pawn—but she also has to deal with his ex-fiancée, whose husband has disappeared, and whose damsel-in-distress act is wearing very, very thin.

Rogan faces his own challenges, too, as Nevada’s magical rank has made her a desirable match for other Primes. Controlling his immense powers is child’s play next to controlling his conflicting emotions. And now he and Nevada are confronted by a new threat within her own family. Can they face this together? Or is their world about to go up in smoke?

Review:
If I'm honest I find it a little intimidating trying to write reviews for this series, mainly because it is the best series I've discovered since I started blogging in 2010 (no joke I've read well over 2,000 books in that time but this is the series I've reread the most - I read my proof copy of Wildfire 3 times before it was even published!) so I want to do it justice. I rave about Ilona & Gordon Andrew's books a lot, everything they write is golden and they have so many creative worlds that I would love to be able to just move in with them and have them tell me stories all day every day. No matter how much I love their Kate Daniels series and the Innkeeper Chronicles the Hidden Legacy has overtaken them to become my all time favourite. There is just something about this world, Nevada and particularly Rogan that I'm head over heels in love with.

I didn't want to start this review sounding like a crazy fan girl but I guess it's a little too late for that so I'm just going to go with it. There was absolutely nothing I didn't love about this book. The relationship development between Nevada and Rogan has been utterly perfect from the very beginning, I love the banter between them and their chemistry is off the charts (tactile anyone!). I love that Rogan is a little bit scary and powerful enough that just his name is enough to terrify people but that Nevada never lets him intimidate her, she more than holds her own and she's actually pretty scary in her own right. The two of them together are a complete power couple and their enemies had better watch out. Then you have Nevada's family and they're all totally wonderful (well apart from evil grandmother anyway!), Grandma Frieda is hilarious and never fails to make me laugh while her teenage sisters and cousins are always up to something. The conversations between them all feel so incredibly realistic and I love the way they'll all bicker amongst themselves but to anyone outside the family they are a completely united front. Nevada's mother doesn't even think twice about threatening Rogan to make sure he won't hurt her daughter even though she knows how powerful he is.

The story in Wildfire continues on from where we left things in White Hot which means we finally get to meet evil grandmother and she was everything I expected and then some. We already know that badass women run in the family but Victoria has tipped over the edge into both psychotic and homicidal so Nevada is going to have to watch all of their backs while she's in the picture. Victoria wants to claim Nevada and her sisters as part of her House and she'll do anything to have them under their control so Nevada has to take drastic measures to ensure they are safe from her. Things are certainly getting interesting and the whole family are going to face some tough challenges in the months and years ahead.

Nevada doesn't just have her grandmother to deal with though and her latest case comes from an unlikely source - Rogan's ex-fiancé. Rynda's husband has disappeared and she has asked Nevada to help her find him, Nevada doesn't really want to work with Rynda but she could never turn down someone so desperately in need so she agrees to take the case. Normally I'd worry about the potential drama caused by having an ex on the scene but in this case I think Nevada handled things beautifully. She had a few natural moments of jealousy and uncertainty but because she's an adult she deals with them and moves on, she knows that her relationship with Rogan is strong and she doesn't let Rynda get under her skin. I think it helps that Rogan hardly even notices Rynda is in the room when Nevada is there too, he only has eyes for one woman and there's no doubt in anyone's mind who he wants.

Wildfire is full of action and we learn a lot more about Nevada's family background and the abilities her sisters and cousins have. They have such a diverse range of magical abilities and I love seeing what they're capable of. This whole world is just incredibly creative magically and once again Ilona Andrews excels with writing three dimensional side characters like Cornelius and his daughter, Bug, Teddy and all the other members of Rogan's team. The magical and arcane creatures they come across in this instalment are spectacular and I wish Zeus was real!

I refuse to believe that we've seen the last of the world. Even though the blurb states that this is the conclusion to the series Ilona Andrews has already mentioned on her website that they are planning to write at least one more story in this world, it just remains to be seen whether it'll be picked up by Avon or self-published. Personally I'm hoping we'll get a lot more than one extra book, this world has so much potential and it feels like there are endless ways the series could continue. The magical system they've created, the different Houses, the war brewing because of the Primes who are trying to start a rebellion, Nevada and her family trying to become a House in their own right and all the tribulations that will bring, there is just so much more to explore. Not to mention the fact that I'd read whole books just about Rogan's tactile abilities!

Whatever happens this is a series I'll always treasure and it's one I'm sure I'll reread at least a couple of times a year.