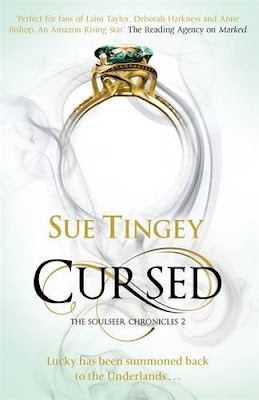 Lucky de Salle thought she was human, then she discovered she was a daemon princess - and now it's looking like she's something much more . . .

Lucky knows she has some hard choices to make: will it be Jinx, the sexy Deathbringer, or Jamie, the gorgeous Guardian?

But before she can even start to enjoy life in the Underlands, her sister's men are slain and Kayla herself is kidnapped by the Sicarii, assassins-for-hire members of a death-cult.

They can't be working for Lucky's nemesis, for Henri le Dent is being held in the court's dungeons, at least according to court torturer Amaliel Cheriour - but the Chambers of Rectification are empty, both Amaliel and Henri have fled and it soon becomes clear that Kayla is just bait to catch Lucky.

Lucky's emerging powers are growing, and Amaliel intends to use her for his own nefarious purposes - though first he has to get past her Guards, not to mention Lucky herself.

Review:
Cursed picks up the story immediately after the ending of Marked so Lucky, along with her guards, are currently on the run after being accused of treason against her father. Before they can figure out who set them up and go about proving their innocence Lucky discovers that her sister Kayla has been kidnapped by a dangerous cult of assassins. Lucky will do whatever it takes to find her sister, even if that means going back to her father and asking for his help. Court politics are more complicated than ever without Kayla on hand to protect her though and her father soon gives her an ultimatum, bring home her sister safely or go on trial for treason.

This series is just getting better and better, Lucky is growing into her own strengths as a character and starting to come to terms with everything she learned about herself and her background in the first book. She still doesn't love being in the Underlands but she is starting to discover that, like humans, not all daemons are evil and there are daemons she can consider her friends. She was marked by two of the most powerful daemons alive and her attraction to both Guardian Jamie and Jinx the Deathbringer is growing stronger by the day but she's worried about having to choose between the two. Both guys still seem more than willing to share though so I'm still rooting for them to end up in a triad relationship - surely that's the best way ever to resolve a potential love triangle!

I love the side characters in this series, Jinx and Jamie are both brilliant, opposites in a lot of ways but both completely united when it comes to protecting Lucky and keeping her safe. It's hard to say which of the guys I prefer, I like Jinx's sarcastic sense of humour and the way he always needles the others but I also love Jamie's sweeter personality. Jamie comes across as more laid back but he's just as dangerous and anyone who underestimates him won't survive long enough to make the same mistake twice. Pyrites the drakon is utterly adorable but the remaining two guards Mr Kerfuffle and Mr Shenanigans have really grown on me too and the whole group just works really well together.

Cursed really stepped things up a gear in terms of action and danger. Lucky and her friends are all put to the test and some scenes were quite gory. Sue Tingey definitely has a knack for writing the blood and guts moments so I'll admit to being more than a little disappointed that the sexy times ended up being fade to black! There is a lot going on in the world and there were definitely a few twists I didn't see coming so I'm definitely looking forward to continuing the series and picking up my copy of Bound.