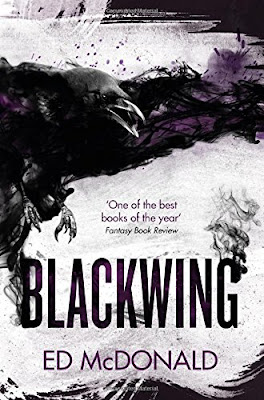 The republic faces annihilation, despite the vigilance of Galharrow's Blackwings. When a raven tattoo rips itself from his arm to deliver a desperate message, Galharrow and a mysterious noblewoman must investigate a long dead sorcerer's legacy. But there is a conspiracy within the citadel: traitors, flesh-eaters and the ghosts of the wastelands seek to destroy them, but if they cannot solve the ancient wizard's paradox, the Deep Kings will walk the earth again, and all will be lost.

The war with the Eastern Empire ended in stalemate some eighty years ago, thanks to Nall's 'Engine', a wizard-crafted weapon so powerful even the Deep Kings feared it. The strike of the Engine created the Misery - a wasteland full of ghosts and corrupted magic that now forms a No Mans Land along the frontier. But when Galharrow investigates a frontier fortress, he discovers complacency bordering on treason: then the walls are stormed, and the Engine fails to launch. Galharrow only escapes because of the preternatural magical power of the noblewoman he was supposed to be protecting. Together, they race to the capital to unmask the traitors and restore the republic's defences. Far across the Misery a vast army is on the move, as the Empire prepares to call the republic's bluff.

Blackwing is a gritty epic fantasy for fans of Mark Lawrence, Scott Lynch and Daniel Polansky.

Review:
Blackwing is an absolutely fantastic debut from Ed McDonald, he's created a dark and gritty world with the perfect anti-hero that readers will find equal parts frustrating and loveable. Captain Ryhalt Galharrow is a member of the Blackwings which means he's above the law and has complete authority to do whatever is required to keep the kingdom safe from the Deep Kings, powerful enemies who want to destroy the world as Ryhalt knows it. The only thing stopping the Deep Kings from rising is a powerful war engine, one that has only been used once before and was so destructive that it created the Misery, a no-man's land full of ghosts and monsters, that separates the republic from the Eastern Empire ruled by the Deep Kings.

Unfortunately for Ryhalt something strange is happening, creatures under the control of the Deep Kings are venturing closer to the republic than ever before and towns that were believed to be safe are now fighting for survival. The big question is why are the Deep Kings no longer afraid of Nall's war engine and it's up to Ryhalt to figure out the answer. When he's tasked with protecting a mysterious noblewoman from the Deep King's monsters the last thing Ryhalt expects is to meet up with his childhood sweetheart. He hasn't seen Ezabeth for years but she has become a powerful magician in that time and she has a worrying theory about the war engine. She needs more information to either prove or disprove her theory but there is a conspiracy across the kingdom and enemies are working against her at every turn.

There are so many reasons to rave about this book, not only is the world building wonderful with a fast paced plot and plenty of twists but you have a whole group of brilliant characters to get to know. Ryhalt is a hardened soldier, someone who has seen and done a lot of dark things and who spends a lot of his time drinking to forget his past experiences. He's also fiercely loyal to the people he cares about and determined to protect his world from the Deep Kings. He's not always the most likeable character but he's definitely human and he has as many good qualities as he does bad ones.

I love the banter between Ryhalt and his crew members, particularly Nenn who is a fierce warrior woman and Tnota, their slightly older but less jaded navigator. Nenn can be quite caustic at times but she's as loyal to Ryhalt as he is to her and she's definitely not someone you'd want to go up against in battle but Tnota is the member of the crew who has the most heart and he's the one who can always lighten the mood when the others are getting too gloomy. Ezabeth is another great character but I'd rather let her stay a mystery so readers can make up their own mind about her.

Blackwing is Ed McDonald's first offering and that makes me incredibly excited to see where he goes from here, I have a feeling he's going to be an author to watch out for and one with a hugely successful career ahead of him.


Don't forget to check out the rest of the stops on the Blackwing Blog Tour: 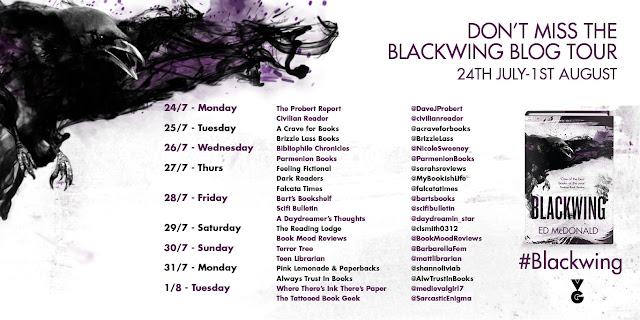