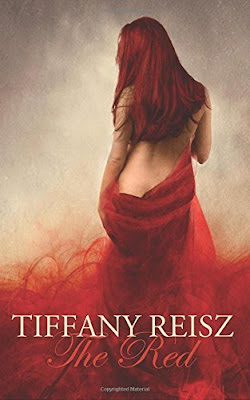 Mona Lisa St. James made a deathbed promise that she would do anything to save her mother's art gallery. Unfortunately, not only is The Red painted red, but it's in the red. She soon realizes she has no choice but to sell it.

Just as she realizes she has no choice but to sell it, a mysterious man comes in after closing time and makes her an offer: He will save The Red if she agrees to submit to him for the period of one year.

The man is handsome, English, and terribly tempting...but surely her mother didn't mean for Mona to sell herself to a stranger. Then again, she did promise to do anything to save The Red...

Review:
Mona made a promise on her mother's death bed to do whatever it took to keep their art gallery, The Red, open but no matter how hard she's tried she is finding it impossible to make ends meet. Her debts have been increasing and she's on the verge of having to sell when a mysterious man makes her a tempting offer. He will help her save The Red if she agrees to submit to him for one night a month over the next year. By the end of the year she'll be completely clear financially and he'll walk away, never to be seen again. She's not sure that's quite what her mother had in mind but Malcom is pretty irresistible so it wouldn't be a hardship to spend time with him, in fact she'd willingly do it for free, so she happily agrees. Soon Mona finds herself drawn into a whirlwind of pleasure beyond imagining where lines between fantasy and reality become blurred and she starts to wonder if it was all just a dream.

If you've ever read anything by Tiffany Reisz you'll already know she's the queen of erotica, she writes such incredibly sex scenes and is always pushing my boundaries. I actually thought she'd pushed me as far as she could throughout the Original Sinners series but she found completely new ways to boggle my mind in The Red. Mona and Malcom's early encounters are incredibly hot, every time they meet they recreate a scene from a famous painting and I enjoyed the amount of detail we were given and the scenes Malcom created for Mona. This book is basically a series of very long sex scenes so the plot outside those scenes is a little on the thin side but when I'm enjoying the smut that isn't an issue. Unfortunately it pushed just a few too many boundaries for me and there was a point in the book where I started crossing my legs in horror rather than getting turned on! I love that Tiffany isn't afraid to take risks but that does mean her stories aren't always going to work for every reader and this one pretty much lost me in the second half.

The mystery about who Malcom was and why he only visited Mona once a month before vanishing as quickly as he'd arrived kept me reading though and I thought that was resolved in a very clever way. The ending felt a little on the rushed side though, there are some huge revelations and everything seemed to wrap up a little too quickly and easily. I wanted more of an epilogue to see what happened beyond that but I guess that's the romance reader in me and this isn't really a romance, it's an erotic fantasy and on that level it hits the spot perfectly.