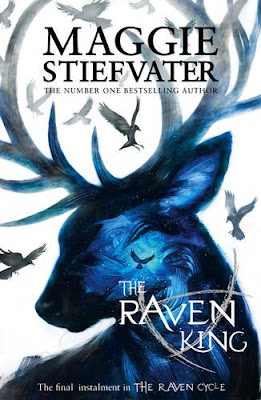 Nothing dead is to be trusted.

Now the endgame has begun.

Nothing living is safe.

Dreams and nightmares are converging. Love and loss are inseparable. And the quest refuses to be pinned to a path.

Review:
It's been a couple of weeks since I finished The Raven King and I'm still struggling to come up with the words to review it. If I had to sum it up in one word then I'd probably have to say forgettable. In fact it was so forgettable that I just had to skim the last 80 pages to try and remind myself how it ended. I loved the first two books in this series but have to admit that I was so disillusioned by Blue Lily, Lily Blue that it took me a year to get around to picking up this final instalment. I'm not sure if the length of time between books contributed to my lack of excitement or if it was just a case of this series and me not being compatible but it was hard work reading this book.

In my opinion there were too many new character POVs introduced in the last book and that continued into this one, we spend too much time finding out about all these minor characters who don't really have any important roll to play in the story and that gives us less time to spend with the characters I actually cared about. We get some brilliant Ronan and Adam moments but not enough of them. We see a little of Blue's family but nowhere near as much as I wanted to. And the romance between Blue and Gansey just kind of stalled out here, what happened to all the shy glances and hand holding and, you know, actual romance? If it was in here I must have missed it when I was busy skimming past all the boring bits about Mr Gray and Piper and Laumonier and Henry and Seondeok and however many others I've forgotten about. Even at the end when we could have got a nice, emotional moment with them theres a third wheel sharing their page time.

I don't think this was a terrible book but I honestly don't think this series lived up to its potential. I do seem to be in the minority again though because most of my friends loved this book so take my opinion with a pinch of salt and don't let me put you off reading it for yourself.