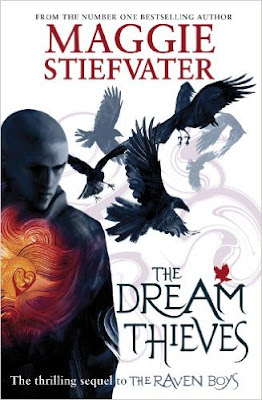 Now that the ley lines around Cabeswater have been woken, nothing for Ronan, Gansey, Blue, and Adam will be the same. Ronan, for one, is falling more and more deeply into his dreams, and his dreams are intruding more and more into waking life. Meanwhile, some very sinister people are looking for some of the same pieces of the Cabeswater puzzle that Gansey is after . . .

Review:
I loved The Raven Boys so I was really looking forward to reading this book, all my friends seem to have enjoyed this one even more so I had very high expectations going in and unfortunately The Dream Thieves just didn't quite live up to them. Not to say this isn't a good book but, for me, it just didn't quite reach the heights I've come to expect from Maggie Stiefvater. It's beautifully written but I found the first half (or two thirds if I'm being really honest) were very slow, when I put the book down I felt very little impulse to pick it back up and in fact I went away and read at least 2 other books when I should have been focusing on this one. That final third of the story makes up for the slow beginning though, when the pace picks up the story starts getting REALLY exciting and I was left feeling desperate to make a start on Blue Lily, Lily Blue.

I said before that The Raven Boys was a very character driven novel and that is definitely the case here too so I'm not quite sure why it didn't work as well for me this time around. I loved getting to find out so much more about Ronan and his background, he is definitely the focus of the story and I really enjoyed learning about the dream world he visits and the way he is able to bring items back with him when he wakes up. I also enjoyed the interactions between Ronan and his younger brother Matthew but I was really hoping to get to the bottom of the resentment between him and his older brother Declan, hopefully we'll find that out in a later book because it's quite frustrating at the moment. Ronan is still holding onto a lot of anger towards his father but we do get to see a sweeter, more caring side to him occasionally which was really nice.

I liked Adam in the first book but I'll admit he got on my nerves for a lot of this one, he does make some important changes towards the end but for a lot of the story he is just so angry and bitter towards his friends and there were a few moments that I worried he might actually harm Blue or one of the others. I'm glad he seems to be turning things around now but he's kind of lost me a little for now and it's going to take him a while to redeem himself fully. Noah has a much smaller role in this story but he is incredibly insightful when we do see him and there was a moment between him and Blue that completely broke my heart because it was so beautiful.

It's hard to know what to say about Gansey, he's just obsessed with his goal of finding Cabeswater as ever and with the power of the ley line fluctuating drastically that is becoming more challenging. I really love the sweet romance that is starting to develop between him and Blue, something all the more bittersweet because she knows that she can't kiss her true love or he'll die. Blue is probably my favourite character though, I love that she's not afraid to be herself, she knows that she's different but has no inclination to try and mould her personality to fit in with those around her. I think her upbringing has a huge amount to do with that and I just love all of the women of 300 Fox Way. The relationship between Blue and her mother is brilliant and they're such close friends as well as mother and daughter which reminds me a lot of my relationship with my own mum (although my mum isn't a psychic LOL).

The women of this series definitely steal the show, there is always some amusement to be had when you visit Blue's family and I love the way they're constantly testing each other's abilities and surprising visitors with their insider knowledge. It's just so nice to read about a houseful of women who are all living together, supporting each other and actually acting like friends. In too many stories they put a bunch of girls together just to watch them rip each other apart so I'm all about the sisterhood in these books. Another wonderful addition to the story was the Gray Man, I honestly wasn't sure what to expect from him at first, especially since he introduces himself as a hit man, but I loved his interactions with Blue and her family and I hope we see a lot more of him in the next two books.

It's really hard to rate this story because although it wasn't my favourite book by Maggie Stiefvater even on a bad day her writing far outshines many other authors. There is certainly something captivating about these characters and I love that she's come up with such a unique concept for the series. I'm definitely looking forward to seeing where these friends go from this point forwards and I have very high hopes that this series will become a firm favourite.