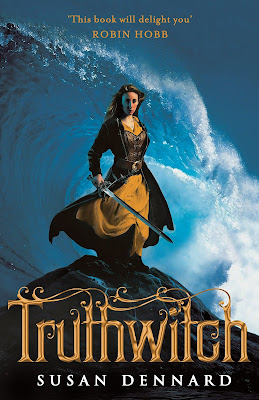 The first in the Witchlands series, Truthwitch by Susan Dennard is a brilliantly imagined coming-of-age story perfect for fans of Robin Hobb, Sarah J. Maas and Trudi Canavan.

In a continent on the edge of war, two witches hold its fate in their hands.

Young witches Safiya and Iseult have a habit of finding trouble. After clashing with a powerful Guildmaster and his ruthless Bloodwitch bodyguard, the friends are forced to flee their home.

Safi must avoid capture at all costs as she's a rare Truthwitch, able to discern truth from lies. Many would kill for her magic, so Safi must keep it hidden - lest she be used in the struggle between empires. And Iseult's true powers are hidden even from herself.

In a chance encounter at Court, Safi meets Prince Merik and makes him a reluctant ally. However, his help may not slow down the Bloodwitch now hot on the girls' heels. All Safi and Iseult want is their freedom, but danger lies ahead. With war coming, treaties breaking and a magical contagion sweeping the land, the friends will have to fight emperors and mercenaries alike. For some will stop at nothing to get their hands on a Truthwitch.

The Witchlands Series:
Truthwitch
Windwitch (2017)
Further titles to be confirmed

Review:
Truthwitch is a book that has had a massive amount of hype surrounding it since long before its actual publication date. I've not actually read anything by Susan Dennard before but, like many others, I was caught up in the excitement that swept across the blogosphere and I was thrilled to get hold of an early copy of the book. I started reading it minutes after it dropped through my letterbox but for some reason I really, really struggled to get into it. So much so that I actually put it to one side and nearly gave up on it. Then a couple of trusted friends promised me that once it got going it's an amazing book so I gave it a second chance and I'm glad I did because I did end up enjoying it.

I think the problem with Truthwitch is in the world building, we're thrown into a complex world (which is great) but with very little explanation about anything (which isn't). There are lots of different types of witches who have all kinds of abilities and then you have the different threads that bind them together. The main characters Safi and Iz are threadsisters but I'm still not 100% sure what that actually means, obviously they're incredibly close, their friendship is actually one of the best things about the book, but it seems like there is a deeper meaning that was kind of lost on me. It does get easier to cope with all the different place names and other things that are thrown at you once the story hooks you in but I completely agree with other reviewers who have said that this almost feels like the second book in a series rather than the first. There were definitely times when I felt I was missing important information and I worried there was a short story or something that I should have read before picking up this book.

Although I struggled with the beginning of the story there are a lot of great things about this book too, I loved the friendship between Safi and Iz from the beginning. We see far too many YA books where girls who are supposed to be best friends actually act like mortal enemies and it's something I'm absolutely sick of so it was refreshing to see how in tune these two were. They have an unbreakable bond and have spent years doing everything together so they make a formidable team when they're in trouble. The way they're able to fight side by side was brilliant and it's obvious that they'd both risk their own lives before seeing the other one get injured. The girls both put their friendship before any kind of romantic relationship which was great to see, you'll never find these two falling out over a boy! We need more of these kind of friendships in fiction and I'd recommend this book just for that. I also loved the idea of the threads binding people together, I still feel we need more of an explanation about that but it's an interesting concept that is worth exploring further.

Iz is a threadwitch which means she can see those threads that link other people together, unfortunately she can never see ties of her own but that is something to be expected. She's never been considered very powerful or particularly good at using her magic and it's left her feeling like an outcast amongst her people, especially since her mother is an important woman who has taken on someone outside of the family as her apprentice over Iz. Safi is a rare truthwitch which means she can always tell when someone is lying to her, it's a useful ability but a rare one and it's one that would place Safi in high demand. Just imagine how useful it would be to always know if your enemy was plotting against you. Safi has always had to keep her ability a secret because it would make her far too valuable to both friends and enemies so when Safi's secret is discovered her life is in danger. Safi has no choice but to make a run for it but there is no way Iz is going to let her best friend run into danger alone.

It took a while for the story to suck me in but once it did I was completely hooked and didn't want to stop reading. I love both Safi and Iz and enjoyed learning more about both of their backgrounds while following their current journey. I also liked both of the potential love interests, one we've spent a bit more time with and I love the chemistry between him and Safi, the other is still a very dark horse that I'm not so sure about right now but there is definitely potential there and I want to learn more about his background. I liked the fact that romance isn't the main focus of the story though, this is much more about the girl's fight to survive and them trying to figure out their place in the world. I think this series has a huge amount of potential and I'm looking forward to seeing where Susan Dennard takes it next.