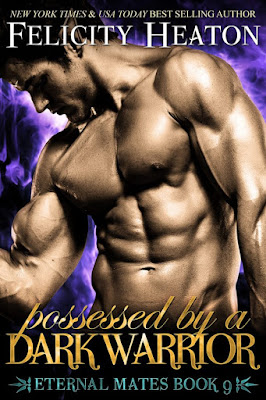 A powerful warrior and commander of the dark elf legions, Bleu is a loyal and devoted male, and one who has never failed in anything—except one thing. Love. When an elusive female dragon shifter surfaces in Hell again, giving him a mission to hurl himself into, he gladly returns to his hunt for her and the deadly blade she stole from his prince seven centuries ago, but as he closes in on his prey, fate reveals she is far more than his enemy.

Having escaped from the black market arena and her life as a slave, Taryn sets her sights back on the task she began seven hundred years ago when her brother stole a precious sword, but in the three centuries she’s been a captive, everything has changed. Corrupted by a craving for power, her brother has become dangerously obsessed with finding the blade and using it to claim the ultimate treasure—the position of King of Hell.

Faced with having to end her beloved twin to stop him from bringing all of Hell to its knees before him, will Taryn be strong enough to use the very blade he seeks against him? And when Bleu finally catches his elusive prey, will he listen to his head as it demands he complete his mission or his heart as it demands he claim his eternal mate?

Review:
Like a lot of fans of this series I've been desperately waiting for Bleu's story since he was introduced in Kissed by a Dark Prince so my expectations for this book were absolutely huge. It's been obvious for a long time now that Bleu is desperate to find his mate, he's jealously watched on while everyone around him has found their own happiness and it's left him feeling more alone than ever. While he's been unlucky in love he has remained focused on protecting Prince Loren and their realm from any threat and he's also spent centuries trying to find a powerful sword that was stolen from them by a dragon. It's fair to say that Bleu is obsessed with the sword, and also with the dragon who stole it, but it isn't until he runs into Taryn again that he finally realises why.

We met dragon Taryn a couple of books ago when she escaped from the slave market with several others, she had been held prisoner for over 300 years and that captivity has taken a toll on her emotionally and physically. Now that she is finally free she knows that she must finish the task she set herself 700 years ago. Her twin brother Terak has lost his mind to darkness, he is planning to take over the whole of hell and Prince Loren's sword is just the weapon he needs to succeed. When Taryn stole the sword from her brother she tried to return it to the elves but they attacked her believing she was the thief so now she feels she has no option but to take on her brother alone. He has turned into a monster and she feels it is her responsibility to stop him but with Terak about to take his war straight to the realm of the elves Taryn is probably going to need a little help to defeat him.

Poor Bleu has pined over several women throughout the series thinking himself in love with them, he was so desperate to find his mate that he has been looking in all the wrong places and it isn't until he starts to spend time with Taryn that he realises how shallow his previous attempts at relationships have always been. I really enjoyed seeing how shocked he was when he discovered Taryn was his fated one and I was happy that he was prepared to do anything to claim her but I have to admit I was a little frustrated by the fact that he'd known she was his mate all along. I felt angry on Taryn's behalf that he knew who she was to him 700 years ago but blocked his feelings and pretended he'd never found her rather than fight for her. I think I would have liked this story much more if he'd never got close enough to realise she was his mate before, it just didn't make sense to me that Bleu has spent so long searching for a love that he already found and I found myself almost blaming him for her 300 years in captivity because he should have been fighting in her corner all that time. That's not to say I didn't enjoy the romance but it didn't quite have the epic feel I was expecting because of his stubborn pigheadedness.

Taryn is a great character and I loved the way she was so determined to do the right thing as far as her brother was concerned. She was in a pretty impossible situation because the last thing she wanted was to hurt Terak but she knew that he was beyond saving and felt it was her responsibility to protect others from his wrath. I have a bit of a dragon obsession so I loved seeing Taryn in her dragon form and her character felt very real to me as her need to fly and be free was so easy to understand. Taryn and Bleu have great chemistry from the very beginning and there is no shortage of sexy times but I also enjoyed the meaningful conversations they shared and the way they were able to open up to each other in a way they couldn't with anyone else.

We also get to catch up with some of the previous characters and I particularly enjoyed the interactions with Bleu, Loren and Vail, they have a very complicated history which has made things tense between them but deep down there is a strong bond between them and they finally proved that to themselves here. There is a lot of forgiveness in this book and some bridges are being rebuilt which leaves our favourites in a stronger position going into the future. This is such a brilliant series and we had some definite hints about potential future couples to look forward to so I'm hoping that means we have many more books to come.