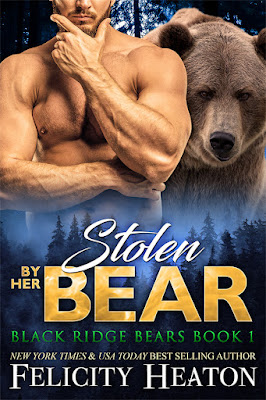 Saint is a bear shifter on the war path. He just wants to sleep the winter away, but his rowdy neighbours in the remote Rocky Mountains valley have other plans. When the cougar shifter brothers refuse to keep the noise down, he reacts on instinct, kidnapping a beautiful female who smells like sweet berries and tempts him like no other—a female who happens to be mated to one of the brothers.
Holly’s first taste of freedom isn’t going as planned. Escaping her family to join in the winter wedding celebrations at Cougar Creek with her friend Ember sounded fantastic, until a grouchy bear shifter grabs her—a gorgeous male who rouses instincts in her that are startling and powerful, igniting a fierce need to growl and stake a claim on him. A gorgeous bear who might be her fated mate.
Can Holly resist the hungers Saint awakens in her? And when Saint realises his mistake about her identity, can he convince the stunning Holly to give him a second chance?
Black Ridge Bears Series:
(Set in the same world as Vampire Erotic Theatre, Eternal Mates & Cougar Creek Mates series but can be read completely separately)
Stolen by Her Bear

Review:
Stolen by Her Bear is the first book in Felicity Heaton's new Black Ridge Bears mini series set in the same world as her Eternal Mates books and at the same location as the Cougar Creek books. If you've read the Cougar Creek books you may remember some of the bears and you'll enjoy seeing familiar characters pop up but this book does work on its own if you're new to the world.
Saint is the alpha of the Black Ridge bears and takes his duty to look after his brothers seriously so when they're woken up from their winter sleep by the noisy cougars its fair to say he's a little bit grumpy about it. He sets off down to the creek to try and figure out what is going on and get them to quiet down a little but his bear side takes over and instead he ends up abducting a female cougar who has an irresistible scent. Holly is spending winter in Cougar Creek to join in the wedding celebrations and the last thing she's expecting is to be snatched up by one of the local bears. The biggest surprise is that she realises she quite likes the gruff alpha and wants to get to know him better. The cougars aren't happy when they discover Holly is missing though and now she's going to have her work cut out to try and diffuse the tension between the two clans.
I have to confess I wasn't sure I'd like Saint in the beginning, lets face it abducting someone to get revenge on your enemy is hardly an endearing trait, but thankfully he is willing to admit when he messes up. He was tired and grumpy and knows he overreacted but he's also big enough to apologise when he's in the wrong and works hard to make amends which made it easy to like him after all.
This series is all about fated mates so the romances tend to come easily to the couples but I enjoyed watching Saint and Holly get to know each other and I liked the way they are potentially going to bring their two clans together. Living in such close proximity it makes sense for them to be allies but they needed a way to bridge the gap and get to know each other well enough to stop causing tension. We got to meet a couple of the other bears and I'm looking forward to reading both of their stories as the series continues.