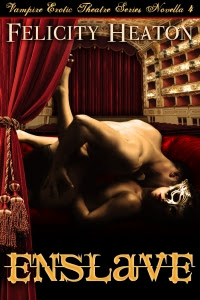 His determination to succeed in business has left no room in his life for love. Now, a beautiful and deadly succubus has teleported into his dark, decadent world and is in danger of enslaving his heart.

The moment their eyes meet, Varya knows she cannot have the exotic dark vampire who sets her pulse racing. His shadowed aura marks him as forbidden, but the hungers he awakens in her are too intense to resist—she must have a taste.

When an erotically-charged kiss ignites their soul-searing passion and reveals something dangerous about Andreu, will Varya leave forever or will she dare to risk all in pursuit of something she thought was beyond her reach?

We were briefly introduced to Andreu in the last book but we didn't know much about him so I was looking forward to discovering more. He is Javier's brother and has come to the theatre to cover for him so he can go on his honeymoon. Andreu also wants to learn more about how the theatre is run so that he can open his own version when he returns to Spain. Andreu plans to take a much less hands on approach to running his own theatre than his brother though, employing others to do the work and leaving himself free to make the most of the profits. As much as he admires Javier's business he finds it harder to understand his brother's relationship choices - the last thing he is looking for is a long term relationship! Andreu likes his freedom too much and won't let anything or anyone take that away from him.

We have come across vampires and werewolves in the series so far but this time we are introduced to succubus Varya. Varya has wandered into the theatre looking for an easy meal but she had forgotten how easily older vampires are able to sense her kind. She is drawn to Andreu from the moment she sees him but it is forbidden for her kind to feed from vampires. No matter how much she knows she shouldn't Varya can't help but keep coming back hoping to get a taste of him. She soon finds herself in over her head when the owners of Vampirerotique catch her intruding and take steps to prevent her from leaving.

As with the previous stories in the series the chemistry between Andreu and Varya is off the charts. Neither of them is shy in going after what they want and they both have plenty of experience at spicing things up a bit. Varya's need to feed on sexual energy adds an extra element and they make the most of the shows put on in the theatre! What I love most about this series is that Felicity doesn't just focus on the physical side of the couple's relationship so we also get to see them build a real emotional connection. Andreu and Varya both have issues that they need to work through but they come out stronger on the other side.

My only disappointment with this series is that I'm going to have to wait for the next two stories but I'm very curious to find out more about Payne and I'm dying to get my hands on Snow's story!