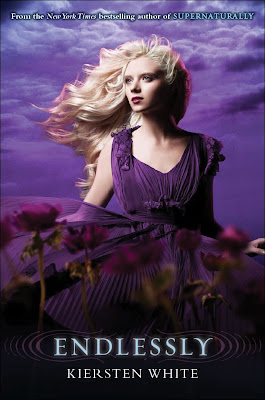 When your world is paranormal, be glad that you’re human… The breathtaking conclusion to the bestselling Paranormalcy trilogy, which left Hush, Hush author Becca Fitzpatrick exclaiming, “I’m in love!”

After the shocking revelations about her parents and the faeries’ struggle for possession of her soul, all Evie wants is to spend a normal Christmas with her shapeshifter boyfriend Lend. But as usual things don’t turn out as planned for Evie, as suddenly the International Paranormal Containment Agency, the local paranormals and her faery ex-boyfriend Reth are all in need, and only Evie and her powers can save them. Once again… so much for normal.

Review:
I really enjoyed Paranormalcy but I have to admit to being disappointed with Supernaturally so I was a bit nervous when I picked up Endlessly. I knew that this was the last book in the series though and I wanted to find out how things ended for Evie and Lend. I'm glad to say that Kiersten White raised the bar again with this book and we're back to the level of the first book in the series. Endlessly was a fun and entertaining read and a fitting end to the series. These books are perfect light hearted summer reading and even if you weren't a huge fan of the second instalment it is well worth reading the final book.

Evie has been longing for normality for most of her life but every time she seems to get close to achieving it something happens to drag her back into the paranormal world. With the IPCA under new management they are determined to bring her back into the fold at any cost - even if it does mean keeping her their prisoner. Not only that but the paranormals all believe that Evie is their only hope to find a way home and are desperate to get her to help them - no matter how much it costs her.

Evie is going to have some very difficult choices to make and she only has a limited time to make them. Whatever she decides will have long reaching effects on not just her but every faerie, paranormal creature and human so she must be careful to make the right decision. Luckily she still has her friends and Lend on hand to help her but she also has a few surprising allies that she isn't quite sure are completely trustworthy. Evie is such a fun character and along with her beloved Tasey (her pink rhinestone covered taser!) she is a force to be reckoned with. The IPCA don't seem to realise who they are messing with and she is equally sure that she isn't going to let the paranormals she considers friends push her into something she isn't sure of. You have to admire her spunky attitude but the best thing about her is the way she always looks at the bright side of things, she has really been through the wringer in this series but she has never let that stop her from looking for the best in everyone.

I don't want to say any more about the story so I'm just going to tell you that if you enjoyed Paranormalcy then you need to read Endlessly. The series has ended on a perfect high note and I'm looking forward to seeing what Kiersten White comes up with next.