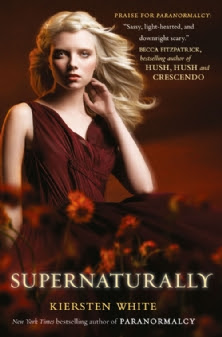 It's been six months since Evie fled the International Paranormal Containment Agency with her shapeshifter boyfriend, Lend, and she finally has the normal life she's always dreamed of.

But when her faerie ex-boyfriend shows up hinting of a battle brewing between faerie courts over Evie herself, she realises that she hasn't left her not-so-normal past far enough behind . . .

Review:
It's been six months since Evie left the IPCA (International Paranormal Containment Agency) to live a normal life.  She had always dreamt of going to school and doing all those other things that 16 year old girls do but she is finding it a lot less interesting than she thought it would be.  In fact, she's kind of missing the life she had with the IPCA so when Raquel asks her to work with them again Evie jumps at the chance.  Can she find a balance between the normal and the paranormal or will she be sucked completely back into the world of the IPCA?

I loved Paranormalcy so have been looking forward to Supernaturally for a year now and couldn't wait to start reading it.  Unfortunately I don't think it quite lived up to my expectations and a lot of the things I loved about the first book seemed to be missing in this installment.  In a lot of ways Evie was like a completely different character to the one I remembered.  Instead of being the witty and confident young girl who was never far from her beloved Tasey and was prepared to use it this Evie comes across as selfish, weak and self centred.  Her whole life seems to revolve around Lend and when she isn't complaining that she isn't good enough for him or that he doesn't spend enough time with her she is organising her whole life around fitting in with his plans.  She won't even consider applying to any colleges apart from the one that Lend already goes to.  It isn't even like Lend is asking her to do this, he seems to bend over backwards to show her how much he cares while all she does is lie to him and go behind his back.

That was another thing that really irritated me - Evie is constantly lying to everyone she knows and most of the time she doesn't even have a reason for it.  OK occasionally I could see her logic (even if I didn't agree with it) but when Lend finds out she is working for the IPCA again why does she have to keep lying to Ari about it?  There was also no excuse for not telling Lend what she knows about him.

I do still like Evie's sarcasm but I wanted to see more of the fun banter that was so prevalent in the first installment.  I also would have loved to see her pull out tasey and whip some butt like we all know she is capable of doing.  I enjoyed getting to see more of the faerie realms and am curious to see more of Reth and the results of Evie's actions when she was in faerie so I will be picking up the next book in the series.  I loved getting to see more of Ari and finding out about her past but I have to admit I wasn't a fan of new character Jack though.  I think because I loved Paranormalcy so much I went into Supernaturally with my expectations too high.  Although I didn't love the story I did like it so I would still recommend it to fans of the series, I just hope that Endlessly is even better.