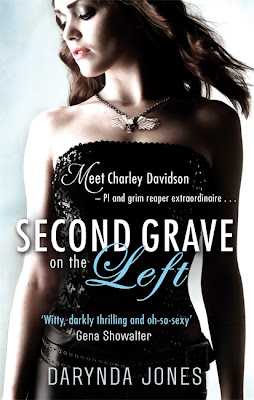 If you hang around with dead people, life can get pretty complicated.  Take it from Charley Davidson, part-time PI and full-time grim reaper.  The deceased find her very sparkly, and demons find her irresistible.  However, Charley doesn't have time to dwell on this: she's got a missing woman to track down.

Meanwhile, Reyes Alexander Farrow (otherwise known as the Son of Satan) is haunting Charley.  He's left his corporeal body because he's being tortured by demons who want to lure Charley closer.  But if the demons get to her they'll have a portal to heaven.  Can Charley handle hot nights with Reyes and even hotter days tracking down a missing woman?  And can she keep those she loves out of harm's way?

Review:
I really enjoyed First Grave on the Right so I was looking forward to catching up with Charley and her friends in Second Grave on the Left. This really is such a fun series and one that never fails to make me laugh while I'm reading it, from the T-Shirt slogan chapter headings, to Charley's snarky commentary and to the witty banter between the characters I giggle my way through the stories.  I'd been a little nervous that the humour wouldn't be as good in the second book but I wasn't at all disappointed and I can't wait to get my hands on the next instalment.

Cookie's friend Mimi is missing and she has asked Charley to help find her but the deeper they dig the more they come to realise that something big is going down. Not only is Mimi missing but more and more of her old school friends are turning up dead, someone has a secret to hide but can Charley figure it out in time? At the same time she is desperately trying to track down Reyes' body before the demons who are torturing him can destroy his body. Reyes is visiting her in spirit and is determined to let his body die but when he admits that he may end up back in hell if that happens Charley knows she will do anything to prevent it. But the demons want nothing more than to get their hands on Charley and use her as a portal to heaven and Reyes isn't prepared to let her risk it.

Charley is a great main character but I love this series as much for the crazy side characters and of course the sexy son of Satan Reyes. Charley's best friend Cookie is a hilarious sidekick and watching the pair of them working together reminds me of Stephanie & Lulu from Janet Evanovich's series. Charley really needs a friend like Cookie who always has her back because it seems like most of the people in her life are keeping secrets from her. I think I was most annoyed at the actions of her dad though, it wasn't so much what he did (that was understandably in a twisted kind of way) but the fact that he didn't warn her what he'd done. I can't say more than that without giving spoilers but I think anyone who has read the book will understand what I'm talking about. I felt that Charley seemed to forgive him for what he'd done a little too quickly but since it happened right at the end of the book I'm hoping she'll make him suffer in the next instalment.

I wasn't sure what to make of Reyes in the first book, he started to grow on me towards the end but it wasn't until Second Grave on the Left that he really had me hooked.  I still have some questions about him and really want to get to know him better but he definitely has the whole sexy, dark and dangerous vibe going on which is a plus point! I still really like Garrett though and enjoy his banter with Charley and the fact that he is also protective of her. Second Grave on the Left was a great instalment to the series and has earned Darynda Jones a spot on my list of must buy authors. I can't wait to see what happens next and thankfully there is less than a month until the release of Third Grave Dead Ahead, it's already at the top of my wish list!