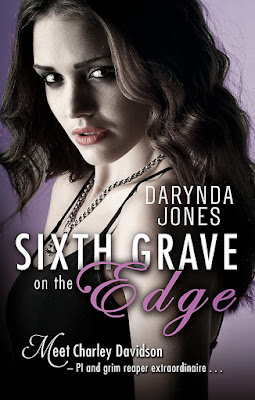 Few things in life can come between a grim reaper and her coffee, but the sexy, sultry son of Satan is one of them. Now that Reyes Farrow has asked for her hand, Charley Davidson feels it's time to learn more about his past, but Reyes is reluctant to open up. When the official FBI file of his childhood abduction lands in her lap, Charley decides to go behind her mysterious beau’s back and conduct her own investigation. Because what could go wrong?

Unfortunately, another case has fallen into her lap—one with dangerous implications. Some very insistent men want Charley to hunt down a witness who is scheduled to testify against their boss, a major player in the local crime syndicate. If Charley doesn't come up with an address in 48 hours, the people closest to her will start to disappear.

Add to that a desperate man in search of the soul he lost in a card game, a dogged mother determined to find the ghost of her son, and a beautiful, young Deaf boy haunted by his new ability to see the departed as clearly as he sees the living, and Charley has her hands full. The fact that Reyes has caught on to her latest venture only adds fuel to the inferno that he is. Good thing for Charley she's used to multi-tasking and always up for a challenge…especially when that challenge comes in the form of Reyes Farrow.

Review:
I know Charley's sense of humour isn't for everyone but I love her and lets face it if you don't like her then I'm pretty sure you'll have given up this series long before you reached book six. Charley may be more than a little insane but has a heart of gold and she's willing to put herself in danger to help even strangers so it's no wonder she has loyal friends. I love her friendship with Cookie and her daughter Amber, I love how protective her uncle Ubie is of her and of course, like pretty much the rest of the female population, I'm obsessed with her nigh-fiancé Reyes. If there was one thing I found slightly frustrating in this book it was her holding out so long before giving Reyes an answer but since they were having fun teasing each other about it I was willing to overlook that.

As always Charley has a lot on her plate, she's still trying to find out more about her Reaper abilities, she's got a client who accidentally sold his soul to the devil, there's the naked dead guy who won't get out of her car, Cookie and Ubie are being stubborn so she's trying to push them together, she's also worrying about Rocket's prediction for Reyes, looking into Reyes' human family and if that wasn't enough she's held at gunpoint by two men who want her to find a woman who is currently in the witness protection program. Yes, there's definitely a lot going on in this one and the way things are going it looks like the series is just going to get even more intense from her onwards.

It's not all action though, there are some great moments between Charley and Reyes as they try to figure out how their relationship is going to work, we get some revelations about her ghostly sidekick Angel that brought a tear to my eye, and there is definitely something strange going on with Charley's father. I'm still not very happy with him so I really want to see more of a redemption arc as we start to unravel his secrets. As long as that arc doesn't include a happy ending for Charley's step-mother I'll be okay with it, that woman is a monster and she does NOT deserve any kind of forgiveness from Charley. Especially after the way she acted in this instalment!

Anyway, I think that's enough to show that I'm still loving this series so I'm signing off here so I can get started on book seven.