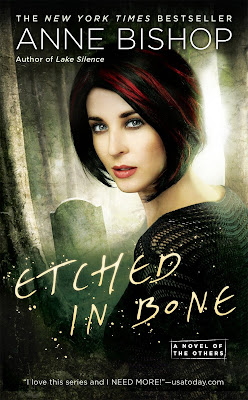 Anne Bishop returns to her world of the Others, as humans struggle to survive in the shadow of shapeshifters and vampires far more powerful than themselves...

After a human uprising was brutally put down by the Elders—a primitive and lethal form of the Others—the few cities left under human control are far-flung. And the people within them now know to fear the no-man’s-land beyond their borders—and the darkness...

As some communities struggle to rebuild, Lakeside Courtyard has emerged relatively unscathed, though Simon Wolfgard, its wolf shifter leader, and blood prophet Meg Corbyn must work with the human pack to maintain the fragile peace. But all their efforts are threatened when Lieutenant Montgomery’s shady brother arrives, looking for a free ride and easy pickings.

With the humans on guard against one of their own, tensions rise, drawing the attention of the Elders, who are curious about the effect such an insignificant predator can have on a pack. But Meg knows the dangers, for she has seen in the cards how it will all end—with her standing beside a grave...

Review:
As humans are struggling to comprehend the new world order since the Elders unleashed their fury on members of the HFL movement Simon and the rest of the members of the Lakeside Courtyard know this could just be the beginning. The Elders have seen first hand how much trouble humans can cause as a group, many cities and towns didn't survive the punishment they doled out after the attacks on the Wolfgard and the places that remain are under intense scrutiny. In the past the Elders kept to the wild country and left the rest of the terra indigene to monitor the humans but now they're paying attention and it wouldn't take much for them to decide extinction is the best course of action after all.

The community around Lakeside is trying to pick up the pieces and Simon is having to deal with finding extra supplies for the ever increasing members of the human pack at the Courtyard. Things are going quite well until Lieutenant Montgomery's estranged brother turns up expecting a free ride. When Jimmy realises that his mother and brother aren't just going to keep giving him the handouts he thinks he's entitled to he puts plans in motion that could end up destroying what's left of humanity.

I've loved every minute of this series so I was really sad to find out that this is the last book focusing on Meg, Simon and the Lakeside Courtyard. I still don't feel ready to say goodbye to this group so I'm glad there are more books in the world and I really hope we'll see more than minor cameo appearances from the people we already know and love. I've been rooting for a Meg and Simon romance from the beginning, it's been blindingly obvious to everyone but the two of them that they've been falling in love since they first met and I've been waiting for them to realise it for such a long time. I hate to say it but I was a bit disappointed that we didn't see more of their romance in this final book, yes they finally start to admit their feelings and the way things ended left me very hopeful about their future, but I wanted more. I wanted to see them take the next step in their relationship, wanted to see them try to figure out how to make things work, was looking forward to seeing how everyone around them would react to them as a couple and to seeing how many funny misunderstandings they would have because they both see the world so differently. There was just so much potential there that it seems like a wasted opportunity to end things where they did.

Having said that there was still a lot I enjoyed about this book, including what we did see of Meg and Simon starting to admit their feelings, in fact if there was going to be another book staring the two of them then I'd have been over the moon with what we did get to see of them in Etched in Silence. I also really enjoyed seeing how the Others coped with having more humans around the Courtyard, there were some funny misunderstandings because they all see things in different ways, I'm particularly thinking of Kowalski on his bicycle here! Every single one of these books have had moments that made me laugh out loud so even though the series is quite dark in places there has been plenty of fun along the way too. The storyline with Monty's brother was extremely frustrating (mainly because I wanted Simon to just eat Jimmy and be done with it!) but it was interesting to see how much attention the Elders were paying to the courtyard and to Meg in particular.

I'm sad our time in the courtyard is over but I'm glad we're not completely done with this world yet. I'm assuming the next book will be set in one of the smaller communities we've already seen glimpses of and there are lots of characters I'd like to know more about so it's going to be fun to see who we're spending time with next. I really hope we'll get to see Meg and Simon making cameo appearances though.