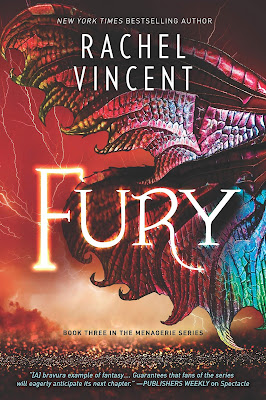 1986: Rebecca Essig leaves a slumber party early but comes home to a massacre—committed by her own parents. Only one of her siblings has survived. But as the tragic event unfolds, she begins to realize that other than a small army of six-year-olds, she is among very few survivors of a nationwide slaughter.

The Reaping has begun.

Present day: Pregnant and on the run with a small band of compatriots, Delilah Marlow is determined to bring her baby into the world safely and secretly. But she isn’t used to sitting back while others suffer, and she’s desperate to reunite Zyanya, the cheetah shifter, with her brother and children. To find a way for Lenore the siren to see her husband. To find Rommily’s missing Oracle sisters. To unify this adopted family of fellow cryptids she came to love and rely on in captivity.

But Delilah is about to discover that her role in the human versus cryptid war is destined to be much larger—and more dangerous—than she ever could have imagined.

Weaving together past and present in this heartbreaking tale of sacrifice and self-discovery, Fury is the deeply moving finale to a series that readers won’t soon forget.

Review:
In the third book in the menagerie series we see past and present collide in a really clever way. This book alternates between the present day where Delilah is heavily pregnant and about to give birth. She's  in hiding with the small group of friends and allies that escaped from the Spectacle with her and they're trying to figure out how to reunite with the others who either escaped or were recaptured and moved to different locations. We are also introduced to a new character, Rebecca Essig, who is one of the few children who survived the reaping in 1986. We see how she survived and what happened to her and her family in the aftermath of the tragedy and that really brought home how horrific it was for people who witnessed the reaping. At first it isn't clear why this new point of view was introduced but Rachel Vincent very cleverly ties both storylines together in a way that makes total sense by the end of the book.

I loved the first two books in this trilogy so I was sad it was coming to an end but I've loved all of Rachel Vincent's books so far so I wasn't actually nervous going into this one. That's why it's painful to say now that I was so disappointed I was with this ending. It just felt to me like the story is unfinished, a character makes the ultimate sacrifice (which was utterly heartbreaking and I STILL can't believe it really happened!) to try and bring peace between the humans and the cryptids but I didn't for a single second believe that what happened would have made a big enough difference. There was just two much fear, hatred and resentment between the two groups for a single event, no matter how powerful, to have such a huge, worldwide impact. The fact I didn't believe things were resolved meant that the sacrifice made felt meaningless which made me even more sad about it.

I did enjoy getting to know the new character Rebecca and of the two storylines hers was by far the most satisfactory but I wanted that same satisfaction for the characters I've grown to love over the previous two books. I ended up so horribly disappointed in the way things turned out for so many of Delilah's friends, and so many of their stories were left unfinished, that this series feels open-ended. I guess I'm just going to have to imagine my own ending but this is the first time one of Rachel Vincent's series has left me wanting more in a bad way and that left a bitter taste in my mouth.