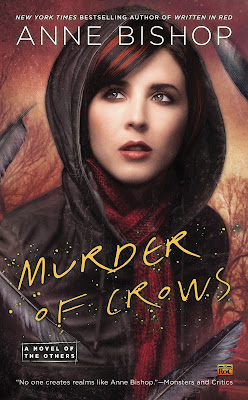 Return to New York Times bestselling author Anne Bishop's world of the Others--where supernatural entities and humans struggle to co-exist, and one woman has begun to change all the rules...

After winning the trust of the Others residing in the Lakeside Courtyard, Meg Corbyn has had trouble figuring out what it means to live among them. As a human, Meg should be barely tolerated prey, but her abilities as a cassandra sangue make her something more.

The appearance of two addictive drugs has sparked violence between the humans and the Others, resulting in the murder of both species in nearby cities. So when Meg has a dream about blood and black feathers in the snow, Simon Wolfgard--Lakeside's shape-shifting leader--wonders if their blood prophet dreamed of a past attack or a future threat.

As the urge to speak prophecies strikes Meg more frequently, trouble finds its way inside the Courtyard. Now, the Others and the handful of humans residing there must work together to stop the man bent on reclaiming their blood prophet--and stop the danger that threatens to destroy them all.

Review:
With two new drugs on the market that seem specially designed to cause trouble between the humans and the terra indigene Meg's prophecies are coming more frequently than ever, the problem is figuring out how to interpret them in time to prevent the tragedies she's seeing. She's setting into life in the Lakeside Courtyard, finding new friends and slowly coming to grips with life outside of captivity but that doesn't stop her worrying about the girls who were left behind, she wants them to get a chance at the freedom she has found but worries about how they would cope on the outside. The Controller is still determined to capture his escaped "property" but Simon and the rest of the courtyard residents will do whatever it takes to protect Meg, they're confused by her human ways but find her extremely amusing and are surprised by how much they enjoy having her around. As tensions between the humans and the terra indigene become increasingly fraught the only chance they have of diffusing the situation is figuring out where the drug is coming from and stopping it's distribution but even that may not be enough to stop the HFL organisation from starting a war they have no hope of winning.

I'm totally hooked on this series and I'm actually having trouble stopping reading for long enough to write proper reviews so I'm going to keep this short and sweet. These books are fantastic, if you like dark urban fantasy then this series is a must read that I can't recommend highly enough. I'm kicking myself for not discovering it years ago but I'm also celebrating that I can continue to binge through another 5 books before I have to start waiting a year for each new instalment.

I love everything about the Lakeside Courtyard, there are so many wonderful characters living there and it's been so much fun getting to know them all. These aren't your usual shapeshifters, vampires and supernatural creatures, Anne Bishop has put her own spin on all of them and created a world that is totally captivating. The humans are at the bottom of this food chain and they're not happy about it but they really wouldn't stand a chance against the terra indigene so it's a good job at least some of them are sensible enough to see that. I have a feeling tensions are only going to get higher though so it remains to be seen if all out war can be avoided.

As I write this review I'm already nearly halfway through the third book in the series and I have a feeling I'm not going to come up for air until I've binged the lot. It's the first time in a long time that I've devoured a series so quickly and I have absolutely zero regrets!