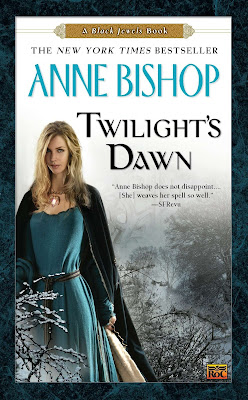 Daemon is settling into his first year of married life with his Witch Queen Jaenelle. But as the celebration of Winsol draws near, he finds himself pulled in multiple directions playing host to his formidable family.

When wounded Surreal returns to Ebon Rih, her former lover Falonar ruthlessly challenges the rule of her family, testing Surreal’s resolve not to succumb to the darkness burning inside her.

When someone lays a vicious trap for Queen Sylvia and her sons, the ruling family of Dhemlan must uncover the identity of a vicious warlord before he returns to finish what he started.

After losing two important people in his life, Daemon has built a wall around his heart. But when he inadvertently forges a new connection, will it be enough to free him from his loveless existence?

Review:
Twilight's Dawn is an anthology containing four stories set in the Black Jewels world, all set after the end of Tangled Webs and beyond. I'm going to talk about each story separately but I apart from a few shocks along the way I thoroughly enjoyed this collection. My review will be spoiler free for the first 3 stories but I can't talk about The High Lord's Daughter without giving away MAJOR spoilers so be aware of that before you continue reading.

This story is set during the first year of Daemon and Jaenelle's marriage and shows the whole family come together to celebrate the winter holiday Winsol. It's a really light hearted and fun story that shows the whole family together and one of the highlights was watching Daemon, Lucivar and Saetan trying to corral Daemonar so that he doesn't destroy all of the presents. I enjoy spending time with this whole group, especially when they're enjoying some downtime together rather than rushing from one disaster to the next.

Surreal has avoided spending time in Ebon Rih since her break up with Falonar but after events in the spooky house both she and Rainier need time and space to recover. Lucivar considers her a sister and wants to make sure she's looking after herself so he brings her home where he can monitor her condition. While there Surreal realises that there's a traitor amongst the Eyriens and that Lucivar's life is in danger.

This was easily my favourite story in the collection, I adore Lucivar and his family and we never saw as much from his point of view in the main books so I love any chance to spend more time with them all. Some of the Eyriens might think that Lucivar is a pushover because he's done his best to make his people welcome in his home but when the traitor tries his luck he'll soon realise he's made some dangerous enemies.

When Queen Sylvia and her sons are targeted by a vicious trap it's up to Daemon and Saetan to try and protect Sylvia's boys while they hunt down the warlord who attacked them. This was a really dark story that was quite upsetting in places, there is a warlord out there targeting young children for rape and murder after all, but I did like the way things turned out for Syliva and Saetan. I did always like them as a couple so it was great to see them find that happiness again, even if it was in the most horrible circumstances.

This is the most controversial story in the collection, something I didn't know before I read this book because I always avoid reviews and blurbs for books in series that I'm already invested in. Anyway, I went into this blind and was completely shocked by not one but TWO deaths in this book. To be honest I'm still not completely recovered from this story now!

The High Lord's Daughter actually starts a year after Jaenelle's death and I honestly couldn't believe that she was really gone, I know she wasn't one of the long lived races like Daemon but I had it in my head that Witch would somehow survive through the centuries at Daemon's side! They had seventy happy years together but that doesn't really seem like much considering he waited a thousand years for her to be born in the first place. Events in this story take place over more than 20 years, at first Daemon is understandably consumed by grief but Jaenelle made him promise to keep living so he has to find a way to try and move on with his life.

I was so shocked and horrified when I first started this story that I nearly just quit reading the book there and then. I was heartbroken by Jaenelle's death and then totally blindsided a second time when another major character dies later on in the story. I thought I would hate everything about it but I surprised myself by liking how things turned out. Daemon ends up finding peace and although he'll never forget Jaenelle he does move on and find a new kind of happiness which I was really pleased about. I didn't want to think about him potentially spending centuries alone and I thought he was well matched with the person he ends up sharing his life with so I was happy for him in that respect.

This still seems like a strange story to have as part of the series and I can understand why so many people hated it but this is a dark fantasy series and that means we were never promised a happily ever after for all the characters involved. I suppose we should be grateful that some of them got to have their happy endings.