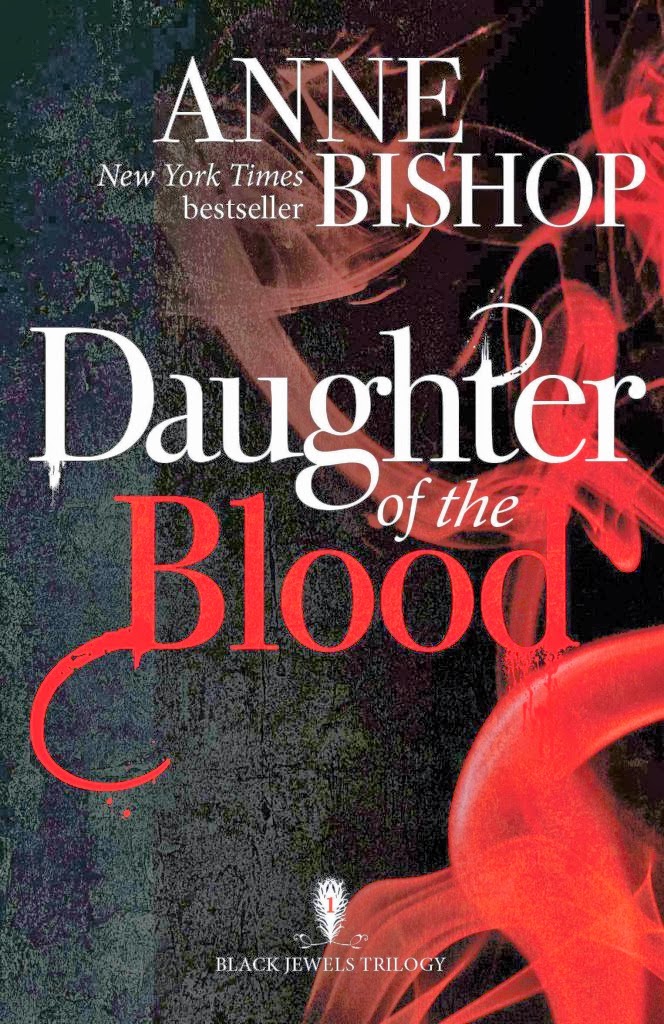 Seven hundred years ago, a Black Widow witch saw an ancient prophecy come to life in her dazzling web of dreams and visions.

Now the Dark Kingdom readies itself for the arrival of its Queen, a Witch who will wield more power than even the High Lord of Hell himself. But she is still young, still open to influence--and corruption.

Whoever controls the Queen controls the Darkness. Three men, sworn enemies, know this. And they know the power that hides behind the blue eyes of an innocent young girl. And so begins a ruthless game of politics and intrigue, magic and betrayal, where the weapons are hate and love--and the prize could be terrible beyond imagining.

Review:
Daughter of the Blood is a really difficult book to review and I think that's partly due to how uncomfortable it made me feel when I was reading it. This is a DARK fantasy story, if you're looking for an easy read then that's not what you're going to get here. However, if you're looking for a story that is as compelling as it is disturbing then this may be just what you're after. If I'd known the kind of things this story included (everything from child molestation, rape, incest, abuse, torture and much much more) then I would have been wary about picking it up but no matter how squeamish reading it made me feel there was never a point where I wanted to put the book down and walk away. I was so engrossed in this world and the characters that I just had to know what was going to happen next!

Anne Bishop has created a fascinating but brutal world, one where power has completely corrupted the people in charge. Society is ruled by those of the Blood, men and women with magic whose abilities are defined by the colour of jewel they receive at birth. It is a matriarchal society where territories are ruled by the Queens who have the strongest magic and they are served by their male counterparts the Warlords. There was peace and happiness for centuries until they fell under the power of a dark and twisted High Queen, Dorothea, a woman who thinks nothing of terrorising the people under her command. In fact she has encouraged the other Queens to treat men as worse than nothing, they are often little more than sex slaves who are under complete control of Dorothea and the other Queens that she allows to rule over smaller territories. The world is split into three different realms - Terreille, Kaeleer and Hell - but most of this story takes place in Terreille and Hell (I have to admit I'm a little confused about how Kaeleer fits into the picture but I'm assuming that will become more clear as the series continues). The realms have been divided and under Dorothea's reign Terreille has become a dark and terrifying place. There is only one hope for the realms to be reunited and prophecy has long since told of Witch, the most powerful Queen to be born in centuries, one who will either heal or destroy the world.

For centuries Saetan, the overlord of Hell, has awaited the birth of Witch and finally she is here. Jaenelle is just seven years old when she finds her way to Hell and befriends him and he instantly recognises her for who and what she is. It will take years of training before she is ready to fulfil the prophecy but that is only if he manages to keep her safe from those that seek to harm her. Jaenelle is already capable of incredible and terrifying things but she doesn't have proper control of her magic and desperately needs the lessons he can give her. Saetan is a father figure to Jaenelle and he would do anything to help her but that isn't easy when she is so determined to follow her own path, she is a wanderer who has friends throughout all three realms and in her own way she is just as determined to protect those she cares about. She refuses to stay safe in Hell when her friends need her help and she keeps secrets about things that happen because she tries to spare Saetan the pain of knowing the kind of trouble she is in.

Jaenelle also befriends Saetan's two sons Daemon and and Lucivar although her relationship with them is very different to the one she has with Saetan. Daemon and Lucivar are both slaves who are under control of Dorothea, they have spent centuries being abused and tortured biding their time until Witch comes into her power and can free them. We don't see a great deal of Lucivar here but whenever we do get his point of view he is either suffering the worst kind of torture or watching it happen to someone else. I'm actually glad we don't see more of him because his scenes were incredibly difficult to read about, I just wish I could say they were the worst in the book and unfortunately they weren't! Daemon is a pleasure slave who has spent centuries forced to do the bidding of Dorothea, but in spite of that he actually has a kind of innocence to him, one that Jaenelle brings to the surface through their friendship. Daemon would do anything to keep Jaenelle safe, he would go through any kind of pain or suffering himself if it meant she didn't have to but even he isn't powerful enough to protect her the entire time. Scenes towards the end of the book absolutely broke my heart and I have no idea how Jaenelle is going to come back from what happened to her. Thankfully the abuse she suffers is one of the few scenes that isn't detailed graphically in the story but the aftermath is more than enough to show just how badly she suffered and it makes for difficult reading.

Daughter of the Blood is a fascinating but brutal story, it is graphic and unflinching when it comes to showing the darkest that the world has to offer. This is a compelling book that hits you where it hurts and makes it hard to keep breathing but one that you can't look away from. As much as I'm kind of terrified to see where Anne Bishop will take us next I'm in it for the long haul and there is no way I can stop reading this series. The world building is absolutely fascinating and I am so invested in these characters that I want to see them get the happy ending that they deserve. Apart from Dorothea and a few others who are evil to the core - them I want to see suffer in the most brutal ways imaginable!