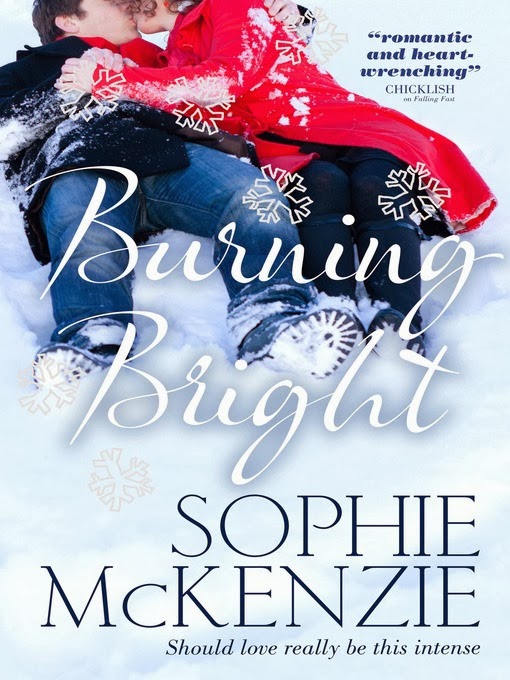 Four months have passed and River and Flynn are still going strong. River thinks Flynn has his anger under control, but when she discovers he has been getting into fights and is facing a terrible accusation at school, she starts to question both Flynn's honesty - and the intensity of their passion. Things come to a head at a family get-together when River sees Flynn fly into one unprovoked rage too many. The consequences for both of them are devastating and threaten to tear them apart forever.

Review:
Burning Bright picks up River and Flynn's story several months on from the end of Falling Fast, they are still head over heels in love with each other but that doesn't mean their problems have gone away. Flynn is still having issues with his temper and as much as he tries not to take it out on River he can be very snappish with her and he's also getting into trouble at school for fighting. River's friends are wary of him because of the rumours about his behaviour and even her mother is against them seeing each other but River is determined not to let anyone get in their way.

Sophie McKenzie has done a fantastic job of capturing the emotions teenagers feel, this series takes me straight back to the days of my first boyfriend and reminds me how obsessed I was with him and how convinced I was that he was "the one". River can be a little naive at times but it doesn't annoy me because I can so clearly remember being exactly like her when I was her age. What I really like about her is that even though she is crazy about Flynn that doesn't make her blind to his behaviour and she is prepared to call him on it when he doesn't treat her right. So many YA and NA books seem to glorify the bad boys and romanticise behaviour that is basically little more than stalking so it is refreshing to see a series that shows this behaviour as wrong and encourages teenage girls not to put up with it.

Just as I did in the first book I still have mixed feelings about Flynn. I feel terrible for the things he went through as a child, nobody should have to witness the way his father treated his mother or take the brunt of his father's anger just to protect his sisters so of course I hate that Flynn had those experiences. I can understand where his anger issues come from and it's easy to see how he ended up with that huge chip on his shoulder but that doesn't justify his behaviour. His anger out and out terrifies me and if he doesn't do something about it then he's going to end up killing someone. Thankfully I'm not the only one who sees that and River is encouraging him to get help with his issues. He can be such a sweet boy and I'm sure that if he takes the initiative and gets the counselling he needs he will be able to turn things around.

I'm looking forward to seeing what happens next in Casting Shadows. I feel invested in the outcome of the story, I want to see River continuing to stand strong and I want to see Flynn prove that he deal with his issues.