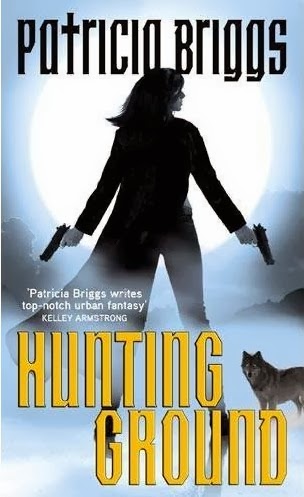 Anna Latham didn't know how complicated life could be until she became a werewolf. And until she was mated to Charles Cornick, the son—and enforcer—of Bran, the leader of the North American werewolves, she didn't know how dangerous it could be either.

Anna and Charles have just been enlisted to attend a summit to present Bran’s controversial proposition: that the wolves should finally reveal themselves to humans. But the most feared Alpha in Europe is dead set against the plan—and it seems like someone else might be too. When Anna is attacked by vampires using pack magic, the kind of power only werewolves should be able to draw on, Charles and Anna must combine their talents to hunt down whoever is behind it all—or risk losing everything.

Review:
I have been absolutely devouring the both the Mercy Thompson and Alpha & Omega series recently so it's no surprise that I enjoyed Hunting Ground. I think I'm just going to love everything that Patricia Briggs writes because she certainly hasn't steered me wrong so far! The world building in these two series is phenomenal, you have the werewolves with their dominance issues, the fae who are very good at keeping secrets plus of course the vampires have their own agendas and I can't get enough of it all. The Alpha and Omega series gives us a change to discover much more about Pack politics and to see how issues are resolved in the world of the werewolves.

Bran has decided that it is time for the werewolves to make their presence known to the general public, he knows that they aren't going to be able to remain hidden for much longer with all this modern technology and he knows it is better to come out on their own terms before they are discovered. As the Alpha who has control of the whole of America Bran doesn't need to ask anyone's permission to carry out his plans but he has agreed to speak to the European werewolves and answer any questions they may have. Charles is the one who gets to be in charge at the conference of Alpha's who have gathered from all over Europe to discuss the issue. It's never easy to have so many Alpha wolves in one place where they're all fighting to prove their dominance but things get even more complicated when some of their visitors come under attack from an unknown enemy. It is up to Charles and Anna to get to the bottom of what is happening before one of them pays the ultimate price.

The best thing about the Alpha & Omega books is the relationship development between Anna and Charles. When we met Anna she had been abused and beaten down for years so it is taking time for her to build her confidence. Deep down she knows that Charles would never hurt her but she still scares easily, especially when they are surrounded by Alpha wolves. I have loved seeing them work through things together, neither of them is experienced when it comes to relationships so even though Charles is so much older than Anna is these feelings are new to him too and it is so sweet watching him try to figure things out. What I love most about Charles is the way he protects Anna without being overprotective, he actually encourages her to stand on her own two feet and is there to provide extra support when she needs it. My favourite Charles quote shows exactly what I mean:

"If it would benefit you, I would kill every wolf here. But there are things that you need to do - and interfering with that is not protecting, not in my book, the best way for me to protect you is to encourage you to be able to protect yourself."

Both Anna and Charles are completely out of their comfort zone here which helps them bond with each other on a deeper level than before and grow as a couple. We get to see Anna learn more about her role as Omega and how she fits into the Pack hierarchy. “An Omega wolf is an Alpha wolf who is extremely zen.” That has to be the best description I've ever seen of an Omega and it explains Anna's role perfectly, she has all the protective instincts of an Alpha but is missing the violent tendencies they usually display. That doesn't mean she won't fight to protect her Pack but it does mean violence isn't going to be the first thing she resorts to.

The romance may be an important part of this series but Hunting Ground is also an action packed story that has so much going on it will keep you on the edge of your seat from beginning to end. I did manage to figure out who was behind the attacks eventually but not until very near the end of the book and only just before Anna and Charles did. I just couldn't read this book fast enough and it's left me desperate to carry on with the series!