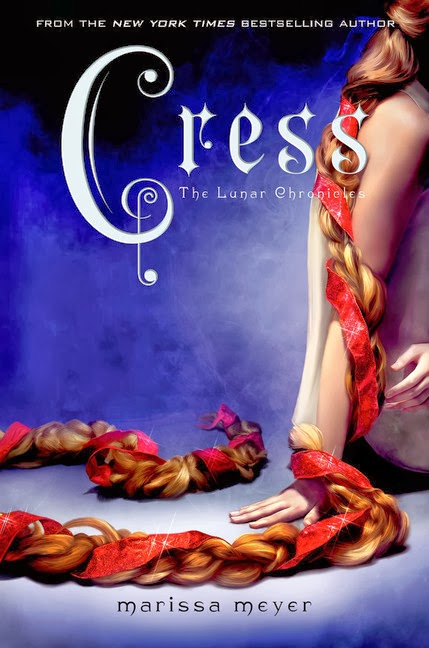 Incarcerated in a satellite, an expert hacker and out to save the world - Cress isn't your usual damsel in distress.

Cress grew up as a prisoner. With only netscreens for company, she's forced to do the bidding of the evil Queen Levana. Now that means tracking down Cinder and her handsome accomplice Emperor Kai. But little does Queen Levana know that those she seeks, and the man she loves, are plotting her downfall . . .

As paths cross and the price of freedom rises happily ever after has never seemed further away for Cress, Scarlett and Cinder.

This is not the fairytale you remember.
But it's one you won't forget.

Check out the Cress book trailer below:


Review:
I've been a huge fan of the Lunar Chronicles ever since I first read Cinder so I couldn't wait to get my hands on Cress, I pre-ordered this book as soon as it was available and I dropped everything to read it the minute my copy arrived. I love the way Marissa Meyer manages to weave fairytale characters into her stories, she has created such a fascinating world and it's full of characters I've come to love throughout the series. Each book adds a new main character, in this case we have Cress (a take on Rapunzel), but we still get the chance to catch up with previous characters and see how their journey is continuing.

Cress has been held prisoner on a tiny satellite orbiting earth for seven years now and she has been forced to help Queen Levana by hiding the Lunar ships full of soldiers that are currently in orbit. All she has ever wanted is to find a way to escape her prison and she hopes that by reaching out to Levana's enemy Cinder she might find herself an ally. Cinder is currently in hiding with Scarlet, Wolf and Thorne but she is determined to find a way to prevent Levana from marrying Emperor Kai and continuing her attempt to take over earth. Cress has insider information that could be vital but it isn't going to be easy to rescue her and still have time to stop the wedding from taking place.

From the minute I started this book I couldn't put it down, I just loved being back in this world and catching up with all of my favourite characters. It's not often an author can pull me back in to a series so easily when I've had to wait a year between instalments, this is a particular problem since I no longer have time to reread the previous books each time but thankfully that wasn't an issue here. Within a few pages I was fully immersed in Marissa Meyer's world and desperate to see how things played out. Cress is a book that has a lot of important revelations that are going to have major impact on how things play out in the final instalment, Winter. As such there were times when I found it a little slower than the previous books but that didn't mean I was any less hooked on the story - I stayed up until 5am to finish reading it so that's got to tell you something about how much I loved it!

Cress is very different to our previous heroines, she is much more innocent and naive but I found that completely understandable considering her circumstances. She has spent seven years trapped on a tiny satellite which is probably smaller than most studio apartments, the only person she has had any contact with has been one of Levana's trusted aides and that has only been for very short periods of time. It's actually quite surprising that Cress is still sane considering everything she's been through! I thought she was such a sweet character and I loved seeing her grow in confidence once she'd been rescued. She starts off as a damsel in distress but by the end of the book she is doing a much better job of standing on her own two feet. I loved Thorne in the previous book but he grew on me even more here, he is still that cheeky guy we came to love but he has a much nicer side that he keeps well hidden. Cress is the only one who sees through his witty banter to the hero hidden deep inside and even though she sees more good in his actions than were really there she ends up making him want to be a better man so he can live up to her expectations.

Cress is immediately besotted with Thorne because he is not only the person who comes to her rescue but as he rightly points out to her he is also the first man she's ever met. I'm glad that he calls her on her childish infatuation and doesn't take advantage of her affection. I would have liked a little more time spent seeing them get to know each other so that I could have had more faith in their relationship but I still enjoyed spending time with the two of them, especially once Cress started to grow up a little as she got used to the outside world. One other thing I missed in this instalment was Scarlet, she doesn't have such a major role in this story and she is separated from the others for the majority of the time which made my heart break for Wolf a little. I can understand why it had to happen that way though and I'm sure it's going to be very different in the next book.

We also get a glimpse at the next heroine, Winter, and I can't wait to find out more about her. She is a lunar princess but because she has refused to use her powers for so long she is starting to lose her sanity. Winter is definitely an interesting character and I'm sure she's going to cause all sorts of chaos in the next book. I've been following this series since the very beginning so it's going to be a long wait until Winter is released in 2015 but I'm sure it will be worth it - I'm absolutely desperate to know how things turn out for Cinder and the gang!