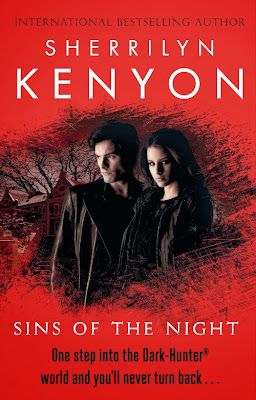 In the realm of the Dark-Hunters there is a code of honour that even immortal bad boys must follow: harm no human, drink no blood; never fall in love. Alexion is the defender of that code. He is judge, jury and executioner; if they step over the line it's his wrath they will face. For centuries Alexion has survived alone. Isolated and haunted by his human past, he has learned to distance himself from his emotions and his role ensures that even his fellow Dark-Hunters give him a wide berth.

However, this time the rogue Dark-Hunter is an old friend. Alexion cannot destroy him without at least allowing him one last chance at redemption. But to do this he needs the help of a female Dark-Hunter who goes by the name of Danger. And the last time Alexion ran into her, she tried to kill him . . .

Review:
Alexion has spent centuries working as Acheron's executioner, it is his job to make sure the Dark-Hunters don't step out of line and he is the one who carries out the punishment for any of them who fail to follow their code. He is forced to live separate to the others, unable to spend long in the human realm and wary of making friends that he may be forced to judge in the future. In fact to most of the Dark-Hunters he is just a myth - the ones who do see him rarely live to tell the tale. Now he has been asked to pass judgement on a friend he knew in his human lifetime, someone he hasn't seen since his early years as a Dark-Hunter. He owes it to his friend to try and save him but can he find a way to bridge the centuries old gap between them? Danger is a female Dark-Hunter who is incredibly loyal to her friends, she would never allow Alexion to hurt them but she can see they are on a slippery slope, one that it will be hard to come back from even with her help. She will do whatever it takes to make them see the truth but their enemy is an expert at spinning lies and turning the Dark-Hunters against everything they should be standing for. Danger knows that Alexion has been sent to kill them all but her only choice is to work with him if she hopes to save any of the people she cares about.

I've become a huge fan of this series over the last few months and Since of the Night is another fantastic read from Sherrilyn Kenyon. This story is such a fun read and it was so full of humour and it had me laughing out loud on several occasions. I loved getting to see another side to Acheron and any time spent with him and Simi is always time well spent. Alexion is probably the closest thing Acheron has to a true confidant, someone who knows more about him than anyone else and it was great to see that strong bond between them. I actually liked seeing that Acheron isn't infallible, he can and does make mistakes but it's the way he reacts to them and works so hard to fix things that make me respect him even more. Alexion is like an older brother to Simi and I loved their interactions too, he and Acheron are both so indulgent towards the demon that it is hilarious to see them all together.

Danger is the first female Dark-Hunter we've really spent time with and I really liked her character, she is a fierce warrior and can definitely hold her own against the daimons she fights. She doesn't trust people easily and keeps others at a distance but once you've earned her loyalty she will defend you with her dying breath. She is wary of Alexion at first, especially because she knows he will think nothing of destroying her friends if they go ahead with the rebellion they are planning, but as she gets to know him she sees that he does everything in his power to convince the Dark-Hunters that they are in the wrong. Alexion doesn't want to kill anyone if he doesn't have to but it is his job to make sure they stick to the rules and he can't allow Dark-Hunters to go around killing humans. The enemy they are facing is a clever one, someone who is able to twist the truth and make it look like Acheron is the bad guy when he has done nothing but protect them for centuries. Alexion has seen first hand everything that Acheron has done for them so he is livid that they are so eager to believe the lies and he won't stand for it.

In a lot of ways I think Sins of the Night was a lighter hearted story than some of the previous books in this series but that doesn't make it any less enjoyable. The banter between Alexion and Danger is fantastic and I loved watching their relationship blossom but I also have to give a shout out to one of the new characters we are introduced to. Xirena was absolutely brilliant and I can't wait to see more of her as the series continues, I'm not going to say more about who she is or how she fits in but she was a fantastic surprise and I loved her. I can't wait to continue devouring this series!