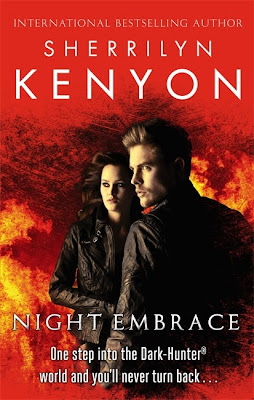 Talon was once a Celt warrior cursed by his ancient gods. Following the murder of his sister, the dying Talon had made a deal with the goddess Artemis. He had been given one act of vengeance against the clan who betrayed him, in exchange for his soul and his eternal service as a Dark-Hunter. Talon has sworn to fight Daimons and rescue the human souls they've captured. He has never had cause to regret this choice - until he meets Sunshine Runningwolf.

The unconventional Sunshine should be Talon's perfect woman. She is beautiful, sexy and isn't looking for a long-term commitment. But the more time Talon spends in her company the more he starts yearning for dreams of love and family that he buried centuries ago. But loving Sunshine would be dangerous for both of them - Talon is destined never to know peace or happiness while his enemies still seek to destroy him and everyone close to him . . .

Review:
Last year I promised myself I would start catching up with some of the series that I've been dying to read for ages now and the Dark-Hunters was one of the ones at the top of that list. As you can see I failed spectacularly in that goal and only read the first 2 books! I really enjoyed both of those books though so it really is about time I made more of an effort to continue the series. It may have been a while since I read about the Dark-Hunters but it didn't take long for Sherrilyn Kenyon to completely suck me back into their world and I think I'm going to go on a bit of a Dark-Hunters reading binge over the next few weeks. One of the things I enjoyed most about reading Night Embrace was the humour in it, I don't remember the earlier books being quite as funny as this one and I'm sure I didn't find myself snorting out loud as I read them. There is a particular scene where Talon is caught without his clothes by Kyrian & Julian that was hilarious, I don't think he's ever going to live down that pink towel!

Anyway, to get on with my actual review I'm just want to say how much I'm coming to love this series. I had a few issues with Night Embrace because I found it quite predictable at times and it does follow a lot of those paranormal romance tropes that we've all seen many times before BUT in spite of that I couldn't stop reading. What makes this series so great is it's characters and once again both Talon and Sunshine stand out in my mind as people who I'd like to spend more time with. It was great to catch up with some of the previous characters but I'm also loving getting to know Acheron better and I was really excited by the introduction of Zarek and Vane. I already know I'm going to adore all three of these characters when I eventually get to their books (and I found out that Zarek is up next which has put a HUGE smile on my face!).

I absolutely LOVED Talon, he is so damn sexy it is unbelievable and I had to smile at the image of this huge leather wearing, motorbike riding warrior walking around with a snoopy pez dispenser in his pocket. He is a fairly typical protective alpha male but I loved the way he was so sweet around Sunshine, he has spent hundreds of years keeping his emotions locked down tight but Sunshine smashes through those barriers within minutes and he'll never be the same again. Talon lost so much before he became a Dark-Hunter that it's almost surprising that he isn't bitter and constantly angry at the world but he is actually quite a fun loving guy who has good friends amongst the Dark-Hunters. He is the one that Ash can always trust to have his head screwed on straight so the way Sunshine sends him off the deep end is quite a shock to the others. He is so protective of Sunshine that he would rather walk away and let her live her life without him than risk bringing his curse down upon her head so I'm glad that Sunshine wasn't about to let him walk away without a fight.

Sunshine is a very unique character, she is quite ditzy and scatterbrained but she doesn't have a mean bone in her body and it was hilarious to hear her thoughts about Talon. She has such an unusual way of looking at things but she she's actually quite a realist deep down. She already has one failed marriage under her belt and the last thing she is looking for is another man who is going to expect her to look after him. Sunshine is very focused on her career as an artist and isn't going to let anyone knock her off that path. That is until Talon worms his way into her heart and then, when she realises how much he means to her she is going to do whatever it takes to keep him in her life.

I loved spending time with these two characters, in a lot of ways they are complete opposites but they fit together really well and make such a cute couple. It helps that they have fantastic chemistry (there is a lot of very HOT sex in this one!) but there is much more to them than that. They build a genuine friendship together and there are a lot of other ties between them. It's hard to say too much without giving spoilers but there is one part of their relationship that normally bugs me when I come across it in paranormal romances but Sherrilyn Kenyon handled it so well that I actually ended up loving the extra connection it gave them. I can't wait to carry on reading this series so I'm going to end this review here to go and get started on Dance with the Devil!