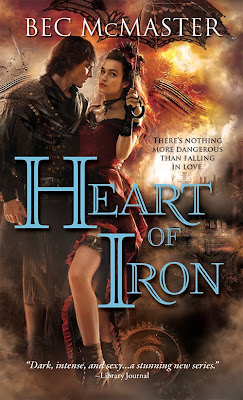 In Victorian London, if you’re not a blue blood of the Echelon then you’re nothing at all. The Great Houses rule the city with an iron fist, imposing their strict ‘blood taxes’ on the nation, and the Queen is merely a puppet on a string . . .

Lena Todd makes the perfect spy. Nobody suspects the flirtatious debutante could be a sympathizer for the humanist movement haunting London’s vicious blue blood elite. Not even the ruthless Will Carver, the one man she can’t twist around her little finger, and the one man whose kiss she can’t forget . . .

Stricken with the loupe and considered little more than a slave-without-a-collar to the blue bloods, Will wants nothing to do with the Echelon or the dangerous beauty who drives him to the very edge of control. But when he finds a coded letter on Lena—a code that matches one he saw on a fire-bombing suspect—he realizes she’s in trouble. To protect her, he must seduce the truth from her.

With the humanists looking to start a war with the Echelon, Lena and Will must race against time—and an automaton army—to stop the humanist plot before it’s too late. But as they fight to save a city on the brink of revolution, the greatest danger might just be to their hearts . . .

Review:
Lena always wanted to claim her place within the Echelon so she was horrified when her family had to go into hiding in the slums of Whitechapel. Having the chance to go back to polite society and have her debut should be a dream come true but as much as she loves the beautiful dresses and the glittering balls she now sees a much darker and more sinister side to things than she did as an idealistic young girl. She's decided to put her new position to good use though and has become a spy for the humanist movement. Unfortunately the people she has allied herself with may have more sinister motives than she could ever have guessed at and it isn't long before she realises that she's in over her head. Will has spent years trying to avoid the Echelon but when he realises what Lena has got herself caught up in he knows he must do anything he can to protect her. As the passion ignites between them they find each other hard to resist but can Will let go of his fear of hurting her enough to let her into his life as well as his heart?

I loved both Kiss of Steel and the Tarnished Knight novella so I couldn't wait to get started on Heart of Iron and I'm happy to say that it was the best book of the series so far. It is so easy to get caught up in the world that Bec McMaster has created and once I'm there I don't want to leave. I love the historical setting and the added steampunk and paranormal elements that all combine together to create a dark and gritty world. If you haven't started reading these books yet you really don't know what you're missing so grab a copy of Kiss of Steel immediately and dive right in!

I'm going to come right out with it and admit that I wasn't the biggest fan of Lena in the first book, she came across as quite childish and could be very selfish so I wasn't sure how I would get on with her as the heroine of this book. Thankfully reading the prequel to this story in the Tarnished Knight novella had started to change my mind about her and within a few chapters of Heart of Iron I'd grown to really like her. She has actually grown up a lot since the first book and has matured into a young woman who I could easily see myself being friends with. She is fierce and stubborn, protective of her friends and someone who wants to make a difference. Lena has willingly put her life at risk by becoming a spy for the humanist movement and I admired her for the changes she wants to see in the world. She can be quite impetuous and her tendency to jump into things without thinking them through properly can often get her into trouble but at least she is willing to accept help when she needs it.

I already really liked Will so it's no surprise that I fell head over heels in love with him throughout this book. He has had such a difficult life spending years in a cage being stared at and ridiculed before Blade rescued him. Even though he is now technically a free man he is the last remaining verwulfen in London since the rest of his kind were slaughtered and he isn't exactly made to feel welcome or allowed to travel outside of Whitechapel. Will is a loner, apart from the small family Blade has surrounded them with he doesn't trust anyone and he has deliberately cultivated his image as the "Beast of Whitechapel" to keep people at a distance. At first glance he can be quite a surly, angry young man but he has every reason for it and those who make it into his inner circle get to see the sweet, caring, loyal man hidden deep inside. Will is terrified of the things that Lena makes him feel, his whole life has been about learning to control his beast but she sets him on edge and makes him feel out of control and vulnerable. On top of that he is terrified of hurting her either because she makes his beast come to the surface or by giving her the highly infectious loupe virus. He wants nothing more than to claim her but knows it can never happen. That doesn't mean he will let anyone hurt her though, he protects the people he cares about and Lena is right at the top of that list so woe betide anyone who crosses her.

I absolutely loved watching the romance that develops between Lena and Will. Will tries so hard to keep her at arm's length but Lena knows what she wants and she keeps on pushing him until she gets it. The chemistry between these two was scorching and I was just about ready to die of frustration by the time they finally get their act together! Thankfully it was more than worth the wait and I loved every minute of the chase too. Although their romance plays a major part of the story there is so much more going on within this book. The world building has been stepped up a gear as we learn more about both the blue bloods of the Echelon and the verwolfen. There is also plenty of action and all the edge of your seat danger you'd expect from a story with a spy for the heroine. Heart of Iron was impossible to put down once I'd started reading it and I can't wait to read My Lady Quicksilver! Bec McMaster has become a must buy author for me and this is a series I can't recommend highly enough.