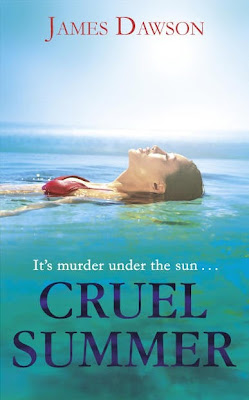 He'd assumed Janey's death was the finale. Turned out, it was only the beginning . . .

Ryan is looking forward to spending the summer with his old school friends at Katie's luxurious Spanish villa. He hasn't seen the gang since their friend, Janey, committed suicide a year ago. He hopes this summer they'll be able to put the past behind them and move on - until someone else arrives, claiming to have proof that Janey's suicide was murder!

Ryan was hoping for sun, sea and sand. Suddenly he's facing a long, hot summer of death, drama and deceit . . .

Review:
I loved James Dawson's debut novel Hollow Pike so I've been looking forward to getting my hands on Cruel Summer ever since I first heard about it. I'm happy to say it completely lived up to my expectations and I loved every minute of it! Cruel Summer reminded me of a British version of the movie I know What You Did Last Summer and I could easily picture this being turned into a film in the future (I really would love to see that happen!). It also has a flavour of the old Point Horror books I grew up on which I absolutely loved.

The story is of a group of friends who are reconnecting on holiday together in Spain after spending a year doing their own thing at different universities. Their last summer ended badly when their friend Janey committed suicide but when an old school friend turns up claiming to have proof that Janey was actually murdered their relaxing holiday by the pool takes a sinister turn. When Roxanne's body is found before she is able to show anyone her evidence the friends are forced to face reality. One of them is a murderer, but who is it, what's their motive and who will be their next victim?

Cruel Summer is a fantastic thriller that is full of unexpected twists and supported by a great cast of characters. I did eventually figure out who the murderer was but it wasn't easy and I think I'd suspected pretty much every character at some point during the story. The author has done a great job of creating a group of friends who all have distinctive personalities, some are more likeable than others but all feel like real people. The story is told from a couple of different points of view but I have to admit I loved spending time inside Ryan's head the most. The way he thought of life as a TV show was incredibly amusing and I liked the way he went about adding drama to the story. Alisha was another complex character though and one I enjoyed getting to know.

Another fabulous book from James Dawson and one I'd highly recommend to fans of this kind of teen thriller!