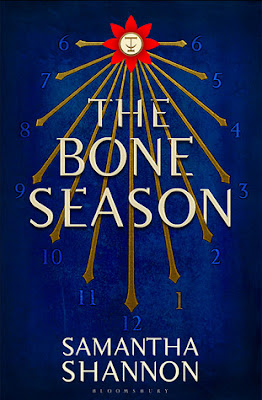 The Bone Season is the first book in a seven-part series of dizzying imagination. Welcome to Scion, no safer place.

The year is 2059. Nineteen-year-old Paige Mahoney is working in the criminal underworld of Scion London, based at Seven Dials, employed by a man named Jaxon Hall. Her job: to scout for information by breaking into people’s minds. For Paige is a dreamwalker, a clairvoyant and, in the world of Scion, she commits treason simply by breathing.

It is raining the day her life changes for ever. Attacked, drugged and kidnapped, Paige is transported to Oxford – a city kept secret for two hundred years, controlled by a powerful, otherworldly race. Paige is assigned to Warden, a Rephaite with mysterious motives. He is her master. Her trainer. Her natural enemy. But if Paige wants to regain her freedom she must allow herself to be nurtured in this prison where she is meant to die.

Review:
Samantha Shannon has created a detailed and complex world that is at the same time both The Bone Season's greatest strength and it's biggest weakness. As much as I was fascinated by the world and desperate to learn more about the different types of clairvoyant abilities the sheer amount of information you are hit with in the first third of the book was a little overwhelming and hard to keep track of without taking copious notes. That does make the story feel fairly slow to get started and considering this is such a large book I can see a lot of people being put off by that fact. As much as the plot is bogged down by the world building I was still hooked enough to carry on reading and I'm glad I did because it really pays off in the long run. There is no doubt that the author has an incredible imagination and I'm sure we've only touched the surface of the world she has created in this first instalment of the series.

The Bone Season is set in 2059 but in a very different future to any we could imagine thanks to the alternate history that the author has created. This is a society where some people have developed clairvoyant abilities but those who have are feared and reviled by the rest of the population. The voyants have been forced to keep their abilities secret and most of them end up joining underground criminal syndicates where their powers are used for profit. Any voyants who are captured by the government are never seen or heard from again so it is assumed they are murdered. Paige works for one of the most powerful gangs in London and her rare dreamwalking abilities make her a valuable member of the team but none of that help her when she is captured. To her surprise instead of being killed because of what she is Paige finds herself sent to an Oxford penal colony. Paige didn't even know the colony existed until she arrives there and she has no way of letting her friends back in London know that she is alive or telling them where to find her.

Considering how much world building there is in this story it's surprising how many questions I still have about the setting. We are given quite a clear picture of life in London but I'm having trouble understanding how Oxford is kept separated from the rest of society and why nobody seems to know of it's existence. We have no information about what is going on in the rest of the country - are there no other cities or towns left? What happened to the general population? How were they able to effectively wipe Oxford off the map without anyone noticing? In Oxford we are introduced to the Rephaim race and again I'm still confused about exactly what they are. I know they have strong psychic abilities but the reason for their appearance on earth and why they haven't returned to their own home was lost amongst the rest of the information we were given. I would have loved to understand more about their motives and how they came to run the penal colony.

I liked Paige as a character and I enjoyed seeing the world through her eyes but I never really felt that I got to know her as well as I wanted to. Near the end of the book we get a glimpse into her childhood and discover how she learned of her abilities and I wish we'd had that information earlier on in the story because it helped to really bring her to life. There are a lot of characters and I had a little trouble keeping them all straight in my mind but it was interesting to see how Paige interacted with new people in an unfamiliar setting, it is hard for her to figure out who to trust and she risks her life if she confides in the wrong person. I was very curious about Paige's Rephaim keeper Warden and I liked the fact that Paige kept her wits when she's around him even though she found him attractive. There was a nice hint at a potential romance but I'm glad that didn't take away from the main focus of the story and I was pleased that there was no case of insta-love.

The ending has left things wide open and I'm definitely curious to see what happens next. I'm hopeful that we'll see a lot more of Paige's London gang members in the next book and I'm looking forward to learning more about all of them but her boss Jaxon in particular. There are definitely some interesting dynamics amongst the group that should be interesting to explore. While I feel that The Bone Season is a promising start to a new series I do think that calling Samantha Shannon the next J.K. Rowling is a mistake. When you give a book as much hype as this one has received you make it very hard for it to live up to expectations and that is probably the main reason I was slightly disappointed by this story. I do think that the author and the series have a lot of potential though and I'll definitely be picking up the next book to see how things progress from here.