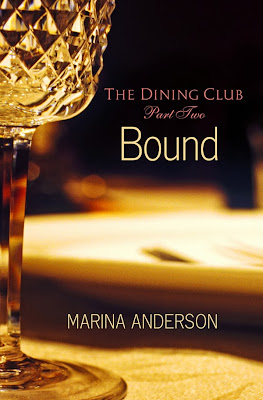 Grace has surprised herself by falling hard for the breathtaking financier David. But now she knows that in order to keep this man, she will have to explore his darker side.

Wrapped in a luxurious dress of chiffon and lace that David gave her for her first challenge, Grace is anxious and excited to enter into the heart of the Dining Club. Little does she know that one of its members, the dazzling and domineering Amber, has every intention of keeping David all to herself...

Review:
Bound is the second instalment of an eight part serialized novel called The Dining Club. Each of these instalments are fairly short (around 30 pages) so don't expect to get a full story in any of them, you really are going to have to read all eight parts to reach what will hopefully be a satisfactory conclusion (I can't confirm that either way just yet because I've only read the first two parts!). The story will be released as a complete novel in January 2014 so if you might prefer to wait until then to read it if you don't like the idea of waiting between instalments.

I had a few issues with the the first instalment to this serialized novel but I hoped that I would enjoy the second part, Bound, more. Unfortunately I just find myself feeling more and more uncomfortable as I continue reading this story. I'm all for stories where couples or individuals experiment with the sexuality and try new things and I have nothing against the idea of the Dining Club. In fact I think it could have been a really fascinating story idea if I didn't feel that Grace was being pushed into something that she didn't want. David has been keeping a major part of his life a secret from her but rather than sitting her down and explaining the kind of things he enjoys and asking her if they can try out new things together he basically blackmails her into going to the club with him. She has no idea what happens at the club, she doesn't know what he wants from her and she is terrified of failing his "tests" because he's told her that their relationship is over if she does. This is not my idea of safe and consensual BDSM and that makes me extremely uncomfortable.

Let me share a couple of quotes to illustrate my point:

Grace's stomach tightened with fear. For a short time she'd forgotten what lay ahead, but now there was no way out. If she wanted to keep David, and after their conversation earlier she knew without doubt that she did, then she had to go through with this.

Grace began to tremble. “I don’t want either,” she whispered. “I don’t know what they mean. I don’t think I can do this.”
“Then you simply refuse the dessert, my darling, but of course you know what that will mean for us.”
“I’m scared; doesn’t that matter to you?”
“Don’t be scared. You don’t have to choose anything, you know that. If none of them appeal to you, then all you have to do is tell Laura. There’s no pressure on you, Gracie, it’s only that…”
Trembling, Grace looked at him, and saw the regret in his eyes.

These are not the thoughts of a woman who is enjoying herself and looking forward to a fun evening with the man she loves. These are the thoughts of a woman who is being forced into something unknown, something that terrifies her and that she has no experience of. Does David sound like a loving boyfriend? No, he doesn't. He sounds like a cold, unfeeling bastard who doesn't give a shit about Grace unless she does what he wants. We're led to believe that Grace ends up enjoying the things she experiences but I don't understand how anyone in that situation could. One minute she's scared out of her wits and the next she's orgasming on command the next - would that really happen?

Two instalments into this story and I can't stand David, I hate his attitude towards Grace and I can't see anything even slightly attractive about him. At this point I'm rooting for Grace to pass his damn tests and then when he claims he's madly in love with her I want her to kick him where it hurts and tell him to get stuffed while she waltzes off into the sunset with Andrew. Unfortunately I highly doubt that will happen. I'm just not sure if I can stomach reading any more of this story.

I also want to reiterate a point I made in my previous review about the cost of these instalments. I really like the idea of reading a serialized novel so you get a bite sized part of the story that is easy to read in a single sitting even if you don't have much time to spare. What I don't like about it is that it works out so much more expensive overall than it does if you wait for the full length novel. For example, the first part is currently £0.99 on Amazon.co.uk with the remaining seven parts being £1.49 each so you'll pay a total of £11.42 for the 8 ebooks that make up the whole story when the paperback version of the complete book can currently be pre-ordered for just £5.24. As a consumer that really upsets me and if I hadn't been given free review copies of the first four instalments from the publisher via Netgalley then I certainly wouldn't spend that kind of money on them.