I'm a huge fan of Suzanne Johnson's Sentinels of New Orleans series so I'm thrilled to welcome Suzanne back to the blog today to celebrate the release of the third book Elysian Fields. If you haven't come across these books before they are part of a fabulous urban fantasy series full of all kinds of supernatural creatures from wizards and loup-garou to shapeshifters, mermen, vampires and elves but my favourite would have to be the historical undead who Suzanne is going to tell you a little more about in just a minute!

Each book just gets better and better and Elysian Fields is my favourite book so far. I'll be posting my review later today but in the meantime here is a bit more information about it along with links to my reviews of the previous books: 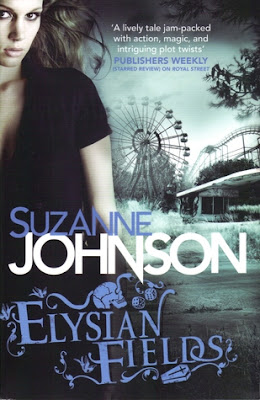 New Orleans is under attack from a copycat who is mimicking the crimes of a serial killer who terrorised the streets almost a century earlier.

Drusilla Jaco could happily live without the advances of the 200-year-old undead pirate Jean Lafitte, but through him she learns the terrible truth: this is no copycat - someone has resurrected the original Axeman of New Orleans, And to make matters worse, the attacks aren't random at all. He's after her.

So there's an undead serial killer on her back. A loup-garou who's going loco. The Elders are insisting on magic lessons from the world's most annoying wizard. And former partner - and sometime Neanderthal - Alex Warin has just turned up on DJ's to-do list.

DJ is about to discover that life in Louisiana has more twists and turns than the mighty Mississippi.

Now please give a very warm welcome to Suzanne Johnson as she tells you all about her historical undead!

One of the great things about writing a series set in New Orleans is the chance to put the city’s amazing history and culture to use. I mean, why set a series in New Orleans if it could just as easily be set in Kansas City or Atlanta or Dallas? I like to see a book use its setting as another character.

I wanted to do justice to my hometown, so I came up with a new species to go along with my wizards, shapeshifters, mermen, and loup-garou. The Historical Undead are famous humans given physical immortality by the magic of human memory. As long as a person is remembered, his name spoken, his history studied—he can cross over from the world Beyond and (since Hurricane Katrina tore down the barriers between worlds) walk among us, looking like any other human.

Which can be a problem when the most famous New Orleanians of all are sometimes also the most infamous. I mean, it’s kind of cool that the trumpet player down on the corner who looks kind of familiar might be the real Louis Armstrong, visiting from the Beyond. But that tall, dark-haired woman with the headscarf and big gold earrings? Can you prove she isn’t the real voodoo priestess Marie Laveau? Do you want to tangle with her to find out? And is that a dead rooster she’s carrying?

But the most famous member of the Historical Undead in New Orleans is the early 19th-century pirate Jean Lafitte. French-born, tall, by all accounts handsome and wicked-smart, Lafitte ruled as many as a thousand pirates and ruffians from his kingdom of Barataria, in the swamps and bayous south of New Orleans.

When I decided to write Armstrong, Laveau, and Lafitte into the series, I came upon the issue of reality versus fantasy. Sure, these are the “Historical Undead,” but I wanted to take the “historical” part seriously. So I read an autobiography of Louis Armstrong to get a feel for his voice, listened to a lot of his music, studied his wardrobe. With Marie Laveau, I tried to not only read some historical accounts, but also look at newspaper stories from her time to get a feel for what she might look like, her demeanor, how she might talk.

And then there’s Jean Lafitte, New Orleans most famous, and most romanticized, citizen. I initially wrote the privateer (he didn’t like being called a pirate, as that was a hanging offense in his day) as a one-scene guy in a scrap with my heroine DJ, who’s a wizard. But a funny thing happened on my way to do a little research on “Le Capitain.”

He won me over. I brought him back for a second scene. Then a third, and a fourth. I read biographies, historical documents written by Lafitte himself, accounts both positive and negative.

In River Road, I gave in and let Jean Lafitte have his way with me…er, I mean become a major series character. In the new book, Elysian Fields, he has settled into a character that I believe reflects what the real Lafitte might be had he encountered t he modern world. He’s practical and yet a dreamer; almost courtly in his manners, but brutal if needed; quick to anger but quick to forgive when it benefits him; more than a tad narcissistic; wicked smart.

How accurate is my physical depiction of Lafitte? I can’t be sure, of course. Biographers agree he was about 6-2, extremely tall for the very early 1800s. He was “well formed,” which I translate as “ripped.” He had dark hair, biographers agreed, and was fair of complexion. He spoke English, Spanish, and Italian, although his first language was French. He was charming, extremely intelligent, charismatic—and lethal. There’s a disagreement on eye color—some say dark blue, some hazel, one even claimed they were violet. So I picked dark blue.

Then accuracy gets dicey, of course, because Jean Lafitte never had access to automobiles, electricity, or telephones. Yet he’s entrepreneurial and smart enough that I think he’d adjust. He despairs at DJ’s wardrobe and the fact that she calls her self DJ instead of Drusilla Jane (“those are letters, not a name,” he says). And her use of slang often leads to confusion:


He stepped back and smiled. “You look magnificent, Jolie. More beautiful than even I realized.”
God help me, I blushed. Again. “You look kinda hot yourself.”
He frowned and looked down at his clothing. “But I am quite comfortable. Why would you believe I was hot?”

Thanks for a fabulous guest post Suzanne! I love the fact that you have so many different types of preternatural creatures in the series but the historical undead are definitely my favourite. I have to admit I have a HUGE crush on Jean Lafitte so I'm very happy you decided to give him a much bigger role than you'd originally planned to!
at 09:00