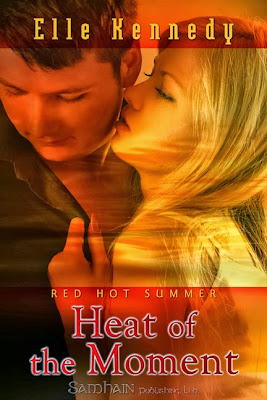 In this heat wave, anything and everything goes. A Red-Hot Summer story. Shelby Harper has lusted over Navy SEAL John Garrett for over a year, but no matter how many sexy signals she sends out, the man shows a complete lack of interest in getting naked. Then she overhears Garrett talking to his SEAL teammate--a discussion in which they conclude she's vanilla. Stung, Shelby sets out to show them exactly how un-vanilla she is.

Garrett can't believe it when sweet, sexy Shelby suggests a wild and sweaty menage. He's been trying to figure out how to ask her out without coming off as a guy who only wants to get in her pants--her friendship is too valuable to him to risk it. But if a crazy, heat-wave three-way is what Shelby wants, then he's ready and willing to give it to her.

Once she gets it out of her system, however...well, then he'll let her know he wants her all to himself.

Warning: This title contains two dangerously hot Navy SEALS and a heroine determined to get it on with both of them. Be prepared to take a cold shower (or maybe two) after reading this heat-wave menage.

Out of Uniform Series:
Heat of the Moment
Heat of Passion
Heat of the Storm
Heat It Up
Heat of the Night
The Heat is On
Feeling Hot
Getting Hotter
Hotter than Ever

Review:
Heat of the Moment may be short but it certainly packs a punch and is a very hot introduction to Elle Kennedy's Out of Uniform series. Shelby has been crushing on Garrett for over a year but no matter how hard she tries to flirt with him he just doesn't seem to pick up on her signals. Then when she overhears him discussing her with a friend and talking about how tame she is she decides to prove him wrong by suggesting a ménage. What she doesn't realise is that Garrett has been fantasizing about her forever and that while he's happy to help her fulfil her fantasy he has every intention of claiming her afterwards.

This is a fairly short novella so you can't expect a huge amount of characterisation but if you're looking for something fast to read staring two incredibly hot Navy SEALS then you can't go wrong. Garrett and Carson sure know how to show a girl a good time and I wouldn't have minded stepping into Shelby's shoes for the night! Although we don't get to know a great deal about the characters there was enough of a back story for me to believe that Shelby and Garrett would make a good couple. Garrett's actions did irritate me for a few minutes towards the end but I forgave him quite quickly and it didn't spoil my enjoyment of the story. I'm also very excited to spend more time with Carson who I believe he's the hero of the second book in the series.