Blog Tour: Extract from Out of Line by Jen McLaughlin (+ International Giveaway) #OUTOFLINE 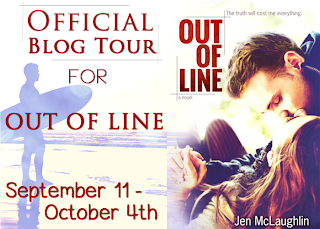 I love, love, LOVE Diane Alberts' adult contemporary romances so I couldn't wait to get my hands on her first new adult story Out of Line that was published under the pen name Jen McLaughlin. I've already read this story and trust me it's one you are NOT going to want to miss out on! I'll be posting my full review later today but Finn is one sexy, surfing Marine you are going to fall head over heels for. I'm excited to be taking part in the Out of Line blog tour today and I have a fabulous extract to share with you that shows Carrie's first meeting with Finn and might give you just a hint at why I like him so much but before that let me give you a bit more information about the book: 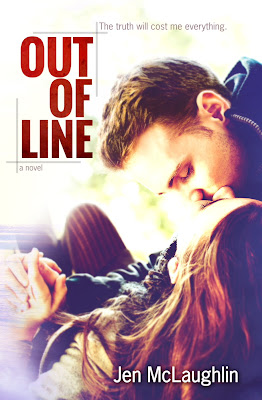 I've spent my entire life under my father’s thumb, but now I'm finally free to make my own choices. When my roommate dragged me to my first college party, I met Finn Coram and my life turned inside out. He knows how to break the rules and is everything I never knew I wanted. A Marine by day and surfer by night, he pushes me away even as our attraction brings us closer. Now I am finally free to do whatever I want. I know what I want. I choose Finn.

Trying to play by the rules...

I always follow orders. My job, my life, depends on it. I thought this job would be easy, all the rules were made crystal clear, but when I met Carrie Wallington, everything got muddy. She's a rule I know I shouldn't break, but damn if I don’t inch closer to the breaking point each time I see her. I’m ready to step out of line. And even worse? I’m living a lie. They say the truth will set you free, but in my case…

The truth will cost me everything.

Out of Line Series:
Out of Line
Out of Time (Novella) 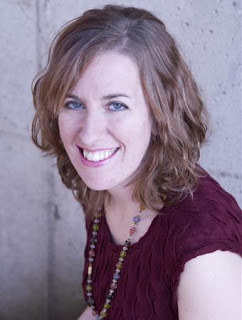 About the Author:
Jen McLaughlin is a New York Times and USA Today bestselling author. She writes steamy New Adult books for the young and young at heart. Her first release, Out of Line, came out September 2013. She also writes bestselling Contemporary Romance under the pen name Diane Alberts. Since receiving her first contract offer under the pen name Diane Alberts, she has yet to stop writing. She is represented by Louise Fury at The Bent Agency.

Though she lives in the mountains, she really wishes she was surrounded by a hot, sunny beach with crystal clear water. She lives in Northeast Pennsylvania with her four kids, a husband, a schnauzer mutt, a cat, and a Senegal parrot. In the rare moments when she’s not writing, she can usually be found hunched over one knitting project or another. Her goal is too write so many well-crafted romance books that even a non-romance reader will know her name.

Nothing but the waves crashing. I hesitated. Someone was there. I knew it. “I know you’re out there. You might as well come out. If you don’t, I’ll...I’ll call the cops.”

I held my breath, waiting to see if the hidden person would call my bluff and come out. After a few seconds, a shadowed form stepped forward. As the shadow grew closer, I realized it was a man. A guy who stood at least six feet tall and had muscles that I thought only existed in the romance books I read.

He had to be a couple years older than me, maybe a senior, and he had on a pair of cargo shorts and nothing else. Hot damn, he obviously worked out. A lot. He had short, curly brown hair, and he looked harmless enough. But those muscles...

Okay, when I goaded the guy out of hiding, I hadn’t been expecting a freaking bodybuilder to walk out of the shadows. I backed up a step, biting down on my lower lip. “Who are you, and why are you hiding in the shadows?”

He had a black tattoo of some sort on his flexed bicep. Wait. Scratch that. He had tattoos pretty much from his elbows up and all across his shoulders and pecs. Hot. Really hot. This was the type of guy Dad kept me away from. He had bad boy written all over him. In numerous ways.

He rubbed the back of his neck and stepped closer, towering over me. “Who are you, and why are you hiding in shadows?”

I blinked and forced my eyes away from his ink. “I wasn’t. I was sitting on the bench.”

“Maybe I was too, before you came out.” He grinned at me. “Maybe you stole my seat.”

I shook my head and tried not to smile, but it was hard. For some reason, I liked this guy. “You like that word, don’t you?” I held my hand up when he opened his mouth to answer. “Let me guess. Maybe?”

He laughed, loud and clear. I liked the sound of it. “Perhaps.”

“Oh my God, he says something else.” I held a hand to my forehead. “I might be imagining things.”

“Hm. You do look a little flushed.”

Probably because an off-the-radar hot guy was talking to me. Maybe even flirting? Crap. I had no idea. The last time a normal boy had flirted with me, Dad had his security team drag him out of the mall by both arms. I had no doubt this guy would get the same treatment if he ever crossed paths with Dad. “I do?”

He stepped closer and bent down, his eyes at level with mine. They were blue. Really, really blue, with little specks of darker blue around the pupil. People were always telling me that I had the prettiest blue eyes in the world. They were wrong. This guy did.

Even though the book was just released, it is already zooming up the charts on Amazon and B&N. To celebrate this, Jen is offering a one-of-a-kind prize for a lucky reader! Anyone who helps spread the word about OUT OF LINE (through tweets, facebook messages, leaving a review, etc.) gets entered to win 30 pages of the manuscript, which include editing marks and special never-before-seen notes from Jen! You will have all the deets on what Jen changed, deleted scenes, and special extras.

You can enter the giveaway using the Rafflecopter form below, the winner will be contacted directly by Jen so she can arrange to send out your prize.