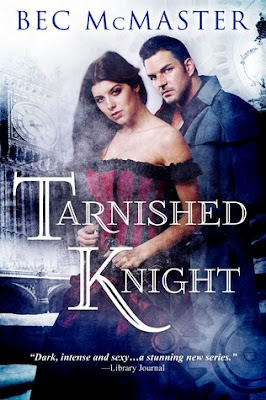 In the steam-fuelled world of Victorian London, vampires, werewolves and slasher gangs stalk the night and a man made partly of metal is about to discover just how far he'll go to protect the woman he loves…

After a vicious vampire attack left him struggling to leash the dark urges of the craving virus, John "Rip" Doolan thinks he's finally starting to master the darkness within. The only thing that threatens to shatter his hard-won control is Esme, his closest friend and the only woman he's ever wanted. If the stubborn beauty ever realized precisely what was going through his mind, their friendship would be ruined.

For six months, Esme has waited for Rip to recover and take her as his thrall, not daring to hope for more. Too afraid to put her heart on the line, she is devastated when Rip reveals that he never had any intentions of making her his.

But when a savage gang of Slashers start causing havoc in Whitechapel, Rip and Esme have no choice. They must face up to the depth of the passion that burns between them and forge a new relationship…or risk losing each other forever.

Review:
Tarnished Knight is a novella that was originally offered as a free read on Bec McMaster's website but that has since been released as an ebook including an additional prequel story for the 2nd book Heart of Iron. This story is set approximately six months after the ending of Kiss of Steel and I'd definitely recommend it to fans of the series before you move on to book 2.

I really liked both Rip and Esme when we were introduced to them in the first book, they are both incredibly loyal members of Blade's household and I it was obvious from the beginning that they had feelings for each other. When Rip was badly injured and on the verge of death Blade's only choice was to infect him with the Craving virus to ensure that his friend would survive. Rip has spent the last six months learning to control his hunger but he hates what he has become. He loves Esme but doesn't feel worthy of her so he is determined that they will remain friends and nothing more. Esme has had feelings for Rip for a long time, he is her best friend but he is also everything she ever wanted in a man, someone who is kind, generous and protective. She wants desperately to become not just his Thrall but also his lover but she doesn't know how to make him realise that. She has tried subtle hints but nothing seems to be getting though to him and she is heartbroken by what she feels is his rejection of her offer.

Rip and Esme don't have the easiest start to their relationship but they have a solid friendship to build upon and the pair also have great chemistry. It is only really a misunderstanding between them and Rip's lack of confidence in his ability not to hurt her that is keeping them apart. When they are forced to work together to protect Blade's territory from a new gang of Slashers they can't stop their emotions from getting involved but can Rip keep Esme safe when their enemy sees her as the perfect target?

Tarnished Knight is a fabulous novella in a brilliant series that I'm looking forward to continuing. I loved Rip and Esme's story and it was great to see the pair of them start to work things out. I also really enjoyed the prequel to Heart of Iron, Will and Lena are both really interesting characters and it was a nice way of getting inside both of their heads and understanding what they think of each other. I have a feeling I'm going to love their book even more than this one!