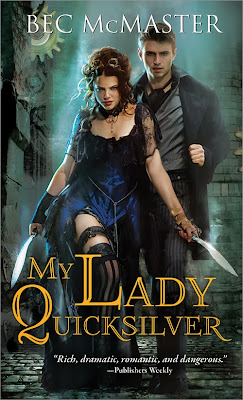 Determined to destroy the Echelon she despises, Rosalind Fairchild is on seemingly easy mission. Get in. Uncover the secrets of her brother's disappearance. And get out.

In order to infiltrate the Nighthawks and find their leader, Sir Jasper Lynch, Rosalind will pose as their secretary. But she doesn't count on Lynch being such a dangerously charismatic man, challenging her at every turn, forcing her to re-evaluate everything she knows about the enemy.

He could be her most dangerous nemesis—or the ally she never dreamed existed.

Review:
I'm a huge fan of Bec McMaster's London Steampunk series so I couldn't wait to start reading the third book My Lady Quicksilver. Unfortunately this wasn't my favourite book in the series but it is still an enjoyable story and one I'd recommend reading if you've enjoyed the previous instalments. I think the main reason I didn't feel as connected with this story is that we don't really see much of the previous characters, the earlier books (and novella) have revolved heavily around Blade and his gang and I missed the dynamic of their group in this book. We have previously met Rosalind and Jasper but didn't know either of them well so I didn't feel as invested in their story.

We have come across Rosalind briefly as her alter ego Mercury, she was one of the leaders of the humanist group before there was dissension in the ranks and a splinter group broke off to make more violent protests. Rosalind still believes in her cause but she doesn't like the new direction some of her people have taken. At the moment she is more concerned with the disappearance of her brother though, he has been missing for several months and her only hope of finding him lies with the Nighthawks so she decides to infiltrate them undercover to make use of their resources. Jasper is the leader of the Nighthawks and as such he is working towards bringing down the humanist movement, he is naturally Rosalind's enemy but as she gets to know him and sees just how much damage the splinter group is causing she starts to question everything she previously believed in.

I'll admit that I wasn't a huge fan of Rosalind before I started this book but she actually grew on me quite quickly. She has strong beliefs about humans being equal to the echelon but she doesn't think it's right to resort to extreme measures to get their point across. She has principles and although her actions aren't completely legal there is a line that she won't cross. Rosalind cares deeply for her family and she is prepared to risk her life for those she loves, she isn't afraid to stand up and be counted and I admired that side to her. Jasper is a proud man and a good leader, he cares about the men under his command and does his best to protect them. His Nighthawks all respect and trust him which says a lot about his character. He is looked down on by the echelon but they are more than happy to put his skills to use as the leader of their police force.

I really liked both of these characters individually but I had trouble accepting them as a couple, I think I just found it difficult to believe that someone as smart as Jasper could be fooled for so long by Rosalind. Seeing him switch back and forth between the "two" women irritated me, of course we know that Rosalind and Mercury are the same person but he doesn't so his actions got on my nerves. I was even more irritated by Rosalind's jealousy because he was attracted to Mercury, it just seemed ridiculous! That whole love triangle feel to the story was something I could really have done without. I enjoyed the sex scenes and they certainly had great chemistry but it didn't sit right with me that Rosalind hadn't been honest with him about who she really was. I think that's very much down to personal taste though & I'm sure it won't bother most people as much as it did me.

What I enjoyed most was learning more about the Nighthawks and discovering more about the plans of the humanists. I think there are going to be some very interesting developments as the story continues and I'm definitely looking forward to carrying on with the series.