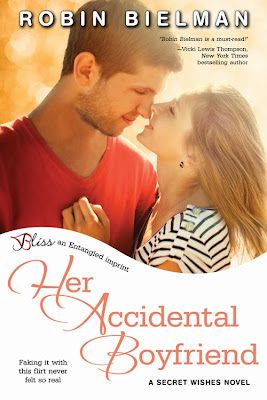 Faking it with this flirt never felt so real . . .

Kagan Owens has a secret. One she thought she’d escaped by leaving New York, but when her past follows her to her temporary new life, Kagan lets a teeny lie slip. And now the town’s biggest playboy and flirt, Shane Sullivan, has become her pretend boyfriend—just until she’s ready to return to NYC. But the handsome, fun-loving Shane makes it tough to determine where their friendly agreement begins and ends . . .

Shane has no intention of settling down—in fact, his job depends on it, and nothing’s more important than his work. Still, he can’t help but agree to Kagan’s scheme, if only to find out more about the mysterious beauty. But when every touch from her sets his heart and body on fire, he realizes playing an accidental boyfriend may be more than he bargained for—and more than he can give.

Review:
I do love a small town romance and after really enjoying Kissing the Maid of Honor I was looking forward to going back to Cascade in Her Accidental Boyfriend. Once again Robin Bielman hit the spot and written a sweet, funny contemporary romance with great main characters and a wonderful supporting cast.

Kagan left New York to get away from her over controlling father and his plans to marry her off to one of their mutual colleagues. She is sick of always being told what to do and of working long hours for her father's company and just wants some time away to figure out what she wants from life. She's been in Cascade for a few months now and has enjoyed being somewhere that nobody knows her history or her family name, she loves her job as a waitress in the local bar and has enjoyed rediscovering her creative side making jewellery. The last thing she is looking for is a fling before she heads back to New York, especially not one with the local playboy but when her past catches up with her she ends up asking Shane to pretend to be her boyfriend. I really respected Kagan for making a break from her father and wanting to stand on her own two feet, she hasn't been happy for a long time but she has found peace in Cascade and for the first time she finds herself surrounded by people who genuinely care about her. It was lovely to see her start to open up to Shane and his family and I enjoyed seeing them all get to know each other.

I loved Shane in the first book (he is Sela's brother and Luke's best friend) so was excited when I discovered this would be his story. Shane has been intrigued by Kagan ever since she arrived in town but she has consistently refused his requests to go on a date. When she asks him for a favour he isn't above taking advantage of that and decides to make the most of his pretend boyfriend status. The more time the pair of them spend together acting like a couple the harder it is to figure out what is real and what is a fantasy. They were already friends but it's starting to feel like a lot more and both of them are quickly in over their heads. Shane is scared of getting involved because he's worried he'll let Kagan down but for once we have a guy who actually talks about his feelings and explains his fears to his partner. Kagan does a great job of reassuring him and helping him put aside events in his past that he has always wrongly shouldered the blame for.

Kagan and Shane make a wonderful couple, they are friends first and have a deep respect for each other but they also have great chemistry. The Entangled Publishing Bliss imprint is actually quite a mild range when it comes to heat levels so although we see some of the build up there are no detailed sex scenes, that isn't a problem but I do think it's nice to know what to expect when you pick up a book so that's the only reason I'm mentioning it. Her Accidental Boyfriend is a feel good story, I smiled the whole way through and the ending was utterly adorable (it may possibly have brought a happy tear to my eye but if you ask me to confirm that I'll deny it!). If you like small town stories with lots of meddling busybodies and gossip, kooky characters and great friendships then you're sure to enjoy this series. Both books so far have worked perfectly as standalone stories and I'd happily recommend either of them to contemporary romance fans.