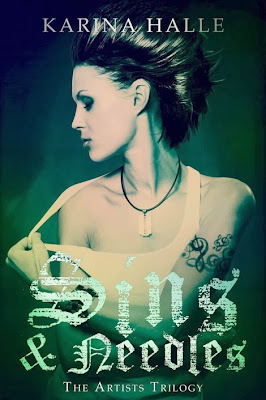 Ellie Watt is used to starting over. The daughter of a grifting team, Ellie spent her childhood being used as a pawn in her parents’ latest scam. Now she’s much older, wiser and ready to give her con artist life a rest. But returning to the dry desert town of Palm Valley, California means one more temptation than she bargained for – Camden McQueen.

Once known as the high school weirdo, Camden is bigger and badder than the boy he used to be and a talented tattoo artist with his own thriving business. Ellie’s counting on Camden still being in love with her but what she’s not counting on is how easily unrequited love can turn into obsession over time.

Review:
The second I finished reading On Every Street I immediately picked up Sins & Needles to see what happened next. I very rarely read books from the same series back to back so that just shows how addictive I'm finding Ellie's story, especially when I say I went straight onto Shooting Scars after this one!

Ellie is a character that I shouldn't really like, she's a con artist who has spent years lying, cheating and stealing from people rather than holding down an honest job. She goes from one scam to the next without thought for the people she hurts and she has multiple different identities so that her past doesn't catch up with her. To say Ellie is flawed is an understatement but underneath it all in some ways she is still incredibly vulnerable and I found it impossible not to feel for her. If you've read On Every Street (which personally I'd recommend reading before this book), then you'll already know about some of her past and understand the reason why she acts in the way she does. I'm not saying that excuses her behaviour but it goes a long way towards explaining it. Even if you haven't read the prequel you will gradually learn about her background as this story progresses because it is told across two different timelines - the present is told in first person from Ellie's POV and the past is told in the form of flashbacks about "the girl". There is some overlap of information from the prequel but also a lot of new information that gives us extra insight into her character. As much as I don't like some of the things Ellie does and at times I was practically screaming at my kindle begging her not to do whatever it was she was planning I never once stopped caring about her. She's become like a close friend or younger sister that I desperately want to take under my wing and point in the right direction. It just shows how good Karina Halle's writing is that I have become so invested in Ellie's life.

Now I wasn't much of a fan of Javier in the first story, I could understand why Ellie was drawn to him but if I'm frank I found him as scary as hell and there is no way I'd want to date him. Then his actions at the end just put the final nail in his coffin as far as I'm concerned. Sins & Needles is set six years on from the events in the prequel and Javier hasn't mellowed in that time, in fact he's got a whole lot bigger and badder and now he absolutely terrifies me! Ellie ran from him all those years ago but he hasn't given up on her, it's a point of pride with him now and he is determined to track her down and take her back with him. Ellie is sick of being on the run and has decided it's time to go straight so she returns to the only real home she ever had - to the uncle that took her in when her parents abandoned her. She didn't expect to find anyone she knew still in the town so she is shocked to run into Camden, the boy she was once friends with as a teenager.

Cam has come a long way from the weird loner he was in school, he's now a successful tattoo artist with a body to die for who also plays in a band for fun. Ellie's plans to turn over a new leaf and start afresh soon fall to the wayside when she realises how successful Cam is, if she can just pull one last con she'll have enough money to go anywhere she wants and start over properly. It's too tempting to resist but Cam isn't going to make it easy on her. I have to say I absolutely adored Cam, he is incredibly sexy but he was also really sweet and had been a great friend to Ellie when she needed him. I was so annoyed at her for planning on conning him and I'm glad she didn't find it quite as easy as she expected it to be. Cam isn't quite as perfect as he first appears though, he's made his own mistakes and got into his fair share of trouble (this author knows how to write realistic, flawed characters that's for sure!) but that didn't stop me falling hard for him. If it's a choice between Javier and Cam I know who I'd pick - there is absolutely no contest between them! As with Ellie I don't always agree with Cam's choices but you can tell they're both trying to make the best of the lives they've been given.

I could rave on about this story and the characters for hours but I'm not going to so you'll just have to take my word for it. Sins & Needles is dark, gritty and real in a way that not many books are. It is about flawed characters who you will care about because of their flaws not in spite of them. It's an intense and emotional thrill ride that will grip you from the first page to the last leaving you breathless at the end and if you're only going to listen to my recommendation for one series this year I suggest you make it this one!