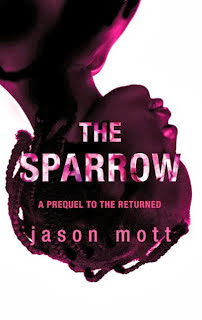 In this short story by Jason Mott, author of The Returned, one determined couple seeks to reunite a young girl with the father who thought he had lost her forever...

When Heather and Matt Campbell find ten-year-old Tatiana Rusesa on the side of the highway, she is thousands of miles away from her village in Sierra Leone. She hasn't seen her family in almost two decades, not since she and her mother were killed by rebel soldiers. Now Tatiana has inexplicably returned, a lost orphan with no place to call home.

As the world dives deeper into uncertainty and chaos, Heather is determined to save Tatiana and help her find her way back to her family. But how much is she willing to lose to protect a girl she doesn't even know?

Learn how the mysterious reappearances begin in The First, and don't miss Jason Mott's unforgettable debut novel, The Returned, from Harlequin MIRA, a moving tale of a family navigating...

Review:
The Sparrow is the second of three short story prequels to Jason Mott's debut novel The Returned, these stories are currently all available for free on Amazon and other ebook stores (I don't know if this will change in the future) and are a nice introduction to the world that the author has created. The novel already has a lot of hype surrounding it and has even been picked up by Brad Pitt's production company to be turned into a TV series so I was very curious to try these prequels.

When Heather and Matt find a young returned child at the side of the road they have very different ideas about what to do with her. Tatiana has appeared a long way from her home in Sierra Leone and it has been almost 20 years since she died so everything comes as quite a shock for her. Heather is determined to track down Tatiana's family and reunite her with them but it could end up costing her everything.

I think this was probably my favourite of the three prequels, we get to see a lot more about how the general public are reacting to the thousands of people who have started returning from the dead, from joy over finding their loved ones, to anger and disappointment that people they love haven't returned through to fear over the whole phenomenon and what is causing it. Heather and Matt don't have children of their own but Heather has strong maternal instincts towards Tatiana and she becomes like a surrogate mother to her while she searches for her family. Matt is more wary and suspicious, he would rather hand Tatiana over to the authorities and let them deal with her. It was interesting to see the differences in Heather and Matt's reactions but I think the flashbacks to Tatiana's life before she died were the part I enjoyed most. I just wish the story had been longer because I wanted to know more about what happened to her.