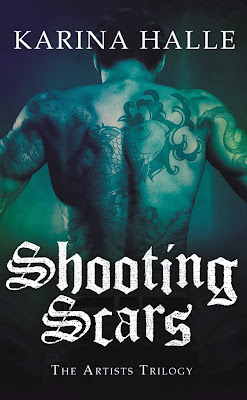 When Ellie Watt made the ultimate sacrifice for Camden McQueen, she never thought it would be easy. But walking away with her ex-lover, Javier Bernal, in order to ensure Camden’s safety has brought a whole new set of dangers. With Javier’s plans for Ellie growing more secretive by the moment, Ellie must find a way to stay ahead of the game before her past swallows her whole.

Meanwhile, Camden’s new life is short-lived. Fueled by revenge and pursued by authorities, he teams up with an unlikely partner in order to save Ellie. But as Camden toes the line between love and retribution, he realizes that in order to get back the woman he loves, he may have to lose himself in the process. He might just turn into the very man he’s hunting.

Told in dual POV from Camden and Ellie.

Review:
If you've read any of my previous reviews for these books or you saw my updates while I was reading them then you'll already know how addicted I am to this series. I was hooked from the moment I picked up On Every Street and I devoured that book followed by both Sins & Needles and Shooting Scars within 24 hours, I literally couldn't stop reading and it's been a long time since a story sucker punched me quite so hard. Shooting Scars definitely isn't a story that can be read as a stand alone and I would recommend reading both of the previous books before continuing this review. Karina Halle is without a doubt a fantastic author and I'm sure she'll be one of my favourite discoveries of 2013!

At the end of Sins & Needles we saw Ellie hand herself over to Javier to protect Camden and give him the chance of starting over with his life. She fully expected Javier to torture and kill her but it was a risk she was prepared to take for Cam's sake. Javier has other plans for her though, he wants her back in his life for good but he has a job for her first, he needs her help to get close to his old boss Travis so they can both get revenge for the wrongs he has done them. With Javier threatening Cam's life Ellie doesn't have much of a choice other than to go along with him. Little does she know that Cam wasn't prepared to let her walk away from him though, he has enlisted the help of her friend and mentor Gus and the two of them are determined to find a way to break her free from Javier's clutches.

Shooting Scars is an emotional roller coaster, even more than the previous two books which is saying something! Javier is just as psychotic and even more dangerous than ever before, he uses emotional blackmail to make Ellie do his bidding and he isn't afraid to put her life at risk if it gets him closer to achieving his goals. In spite of the things he does to her they have a strong emotional connection and when Ellie is at her lowest he manages to twist things around and start building on her old feelings for him. I hated seeing Ellie falling for his tricks but I could understand why she was pulled in by him, as much as I don't like Javier and he scares the crap out of me you can't deny the fact that he can be a charming man when he wants to be and he's very good at tugging on Ellie's heartstrings.

I've always been a fan of Cam but in this book his actions become even more questionable. I know he's done bad things in the past but he pushes the boundaries even further this time. There are a lot of reasons why I shouldn't like him but I can't help it - I'm still crazy about him and firmly on Team Cam! While he definitely has a dark side I feel that he has been pushed to take desperate measures because of how much he cares about Ellie, I can't see him ever behaving in the same way if he didn't know her life was at risk but perhaps I'm wrong and I've fallen for a psycho! I definitely think there is no question of who the lesser of two evils is when you compare Cam and Javier though. I think that one of the things I love most about this series is that all of the main characters are flawed - they lie, cheat, steal and often do a lot worse but at the same time they are incredibly real and most of the time very likeable. There is no black and white with these characters, they are all interesting shades of grey and never quite react how you'd expect them to.

I loved every minute of this thrill ride, I honestly don't think I could be more invested in the outcome of this series - so much so that I'm almost afraid to pick up Bold Tricks. I'm desperate to know what happens next but I'm scared that things aren't going to turn out the way I want them to and I'm going to find it hard to let these characters go at the end of the journey. I'm so glad I discovered these books though and I know I'll be re-reading them all again in the future.