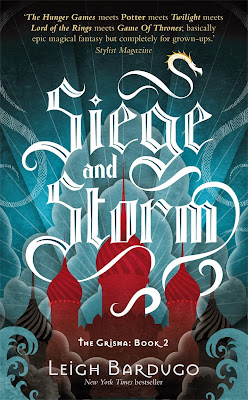 Hunted across the True Sea, haunted by the lives she took on the Fold, Alina must try to make a life with Mal in an unfamiliar land, all while keeping her identity as the Sun Summoner a secret. But she can't outrun her past or her destiny for long.

The Darkling has emerged from the Shadow Fold with a terrifying new power and a dangerous plan that will test the very boundaries of the natural world. With the help of a notorious privateer, Alina returns to the country she abandoned, determined to fight the forces gathering against Ravka. But as her power grows, Alina slips deeper into the Darkling's game of forbidden magic, and farther away from Mal. Somehow, she will have to choose between her country, her power, and the love she always thought would guide her--or risk losing everything to the oncoming storm.

Review:
Shadow and Bone was one of my favourite books of 2012 (and I loved it just as much when I re-read it last month!) so Siege and Storm was one of my most anticipated releases for 2013. When I have such high expectations for a story it can be incredibly hard for an author to live up to them so I always feel a little nervous picking up the sequel to a much loved book. Thankfully I had no need to worry in this case and Leigh Bardugo has delivered another captivating tale set in Ravka, it didn't quite match up to the first book but it was still a very strong instalment to one of my favourite series.

I don't want to say too much about the plot of the story because, as with the first book, I think you're better off going in not knowing what to expect. What I will say is that if you enjoyed Shadow and Bone then I'm sure you'll enjoy the sequel just as much. Alina has already been through a lot but she is going to find herself tested more than ever before, so many things are thrown at her in such a short space of time and she is struggling to come to terms with the changes in herself since she unlocked her powers. People look at her differently now and she is under a lot of pressure from all kinds of directions about how she should proceed. Most of Ravka believe she is a saint and is the only one who can save them from the Darkling but that is a lot for her to live up to. I have to admit I was sad to see her struggle to open up to the people around her and the strain that put on some of her personal relationships but it was completely understandable and just made her character feel even more real.

I loved Mal in the first book but I found myself getting a little irritated with his actions some of the time in this one. He is letting Alina's powers drive a wedge between them and while I can understand how out of place he feels around the Grisha because he lacks their abilities I expected him to be more supportive of her rather than someone else who was trying to put pressure on her. There are moments when I love them together but others where I want to shake the pair of them and tell them to grow up. I guess the fact that they can make me so angry just goes to show how much I care about them though and I'm still really hoping they'll be able to find a way to work things out. The Darkling is as intriguing as ever, in the first book he was a much more seductive character though and this time I found him much less appealing. His actions at the end of Shadow and Bone left me reeling and he continued to shock me with how power hungry he has become and the lengths he will go to to get what he wants.

Along with the characters we already know and love (or love to hate!) we are introduced to some fabulous and memorable new cast members. A particular favourite was the Privateer Sturmhond but I also really liked the twins Tolya and Tamar. Siege and Storm had everything I loved about the first book - the fantastic characters, fast paced action, fabulous world building and some brilliant plot twists. I am desperate to know what happens next so Ruin and Rising is already at the top of my wish list for 2014 (why oh why do we have to wait so long?? LOL). If you haven't started reading this series yet then you really are missing out and I can't recommend it highly enough!