Review: Crash Into Me - Tracy Wolff 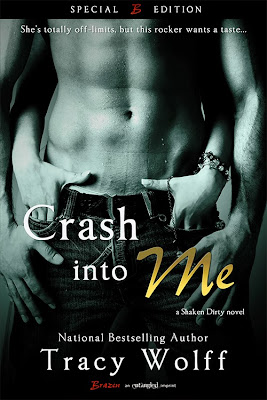 She’s totally off limits, but this rocker wants a taste . . .

Jamison Matthews has lusted after Ryder Montgomery since she was a preteen. But now that Ryder and her brother’s band, Shaken Dirty, has made it huge, she’s just one of many pining for the brooding lead singer. Too bad Ryder still sees her as a little sister. Not that it matters. Her brother would never allow it, and the last thing Jamison wants is to be another notch on a rock star’s bed post. Even if it’s Ryder’s.

Ryder doesn’t deserve happiness. After his fame destroyed his last girlfriend, he swore he’d never fall in love again. So when Jamison, the girl he’s been in danger of loving for years, joins the band on the road, he’ll do anything to deny the sparks between them—even after one hot night together. But Jamison is determined to show Ryder that he’s worthy of love—her love—and that she’s all grown up…and ready to play.

Review:
Jamison is having the worst week in history, she caught her boyfriend cheating with her best friend, crashed her car and then lost her job. Really it couldn't get much worse so when her brother, Jared, member of rock band Shaken Dirty asks her to join his band on the US leg of their tour it's not like she has a lot of other options. The only downside is spending so much time in close confines with lead singer Ryder. Jamison grew up around the band members and they're all like big brothers to her but Ryder has always been something more and she's been more than a little in love with him since she was a teenager. He's never looked at her as anything other than his best friend's little sister though and it's time for her to show him that she's all grown up and more than ready for a relationship.

Crash Into Me is the first book in Tracy Wolff's new Shaken Dirty series and I have to say it gets things off to a great start. I loved the dynamics within the band, each of the characters obviously has their own issues to deal with but they're all basically nice guys and I'm looking forward to getting to know them better. In particular I'm excited about Wyatt's story, I want to know more about why he uses drugs to block everything out and I'd like to see him get his life back on track. I really loved Jared too though, he is very protective of Jamison and he cares a lot about all of his friends. I don't think he's going to be able to properly settle down until he knows that the others are all happy so I'm expecting his story to be one of the last in the series.

Although we get a great introduction to the members of the band this is very much Jamison and Ryder's story and oh boy what a story it is! Jamison has been in love with Ryder for a long time now but she knows there is no way he'll ever commit to one woman so she goes along with the idea of having a fling while they're touring together determined not to let her heart get any more involved than it already is. Ryder blames himself for something that happened to his ex a long time ago and he has sworn that he will never get that close to anyone again. Jamison is different though, she sees a side to him that nobody else has ever noticed and she makes him feel like a better man and that perhaps he could be worthy of her love after all. I enjoyed seeing them spend time together, they have a strong bond of friendship and they make a really cute couple. It was also amusing seeing them both insist that they were just in it for a short term fling when it was so obvious that it meant so much more than that.

Jamison and Ryder have incredible chemistry and this book is hot, hot, hot! Throw in a bunch of rock stars on a multi band tour and you're sure to have plenty of bad behaviour and crazy fan antics that will keep everyone on their toes. If I had a minor complaint it would be about the epilogue, I actually felt it gave away too much about what is to come as the series continues. I think series books very rarely need epilogues, especially when you'll be seeing more of the couple in future books, so I would rather have had more time spent with them just after they'd fallen in love rather than a year down the line. Like I say that was a minor complaint though and I thought that Crash Into Me is a fab start to the series. I'm already looking forward to reading the next book as soon as it's available and in the meantime I'll have to check out some of Tracy Wolff's other books.