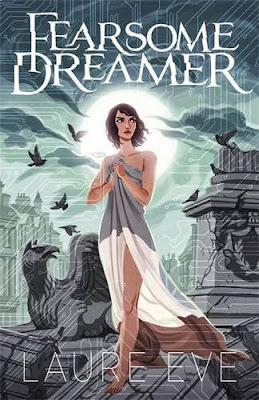 There is a world where gods you've never heard of have wound themselves into hearts, and choice has led its history down a different path. Here a fiercely independent country called Angle Tar holds its own against the mass of technologically advanced nations that is World.

Apprentice hedgewitch Vela Rue has had strange dreams all her life; vivid and mysterious and incredibly real. Now she knows that her dreams mean something more, that she has a talent - and that her government will do anything to train her in it.

White is a teenage boy whose unbelievable gifts force him to flee from the fiercely unforgiving World to Angle Tar. There he is taken under the wing of Frith, a government spy who sees him as a prodigy; perhaps even the ultimate weapon they have been waiting for.

But Frith has his own secret motives; and when Rue and White meet, their electric attraction may spell disaster . . . or change everything.

Review:
Fearsome Dreamer is a novel that is hard to fit into any one category, it manages to have an olde worlde feel to it at the same time as it includes some fantastical futuristic technology. Think alternate history, one small isolated country standing against corporate global domination, magic, dreams that intersect with reality and characters from two completely different worlds colliding and you'll be along the right lines. This is without a doubt one of the most original books I've read in a long time and it's an impressive debut from Laure Eve. She has put a huge amount of effort into building her world but she manages to do it seamlessly so I was never left feeling confused or subjected to info dumping.

Both sides of her world are complete opposites of each other but they are both familiar enough to grasp easily. One one hand you have Angle Tar, a small island country that is cut off from the rest of World. Visiting Angle Tar is like stepping back in time, you have very few forms of transport, most people will spend their entire lives in the same village and life is very simple. They have very little in the way of technology and it's a bit like stepping back into the middle ages. Then on the other hand you have the rest of World, where lives are ruled by technology. People rarely leave their homes because they can visit anywhere on the planet via a virtual reality network, food is created by machines and everyone's lives are monitored constantly. Life in both places couldn't be more different and the two sides are natural enemies but a danger is coming that neither is fully prepared to face and that is where Frith and his Castle colleagues come in. They know an unforeseen enemy is approaching and they are searching for the Talented few who are the only ones with a chance of saving the world.

Rue is a young apprentice hedgewitch who dreams of a better life, she believes she is destined for greatness and when she is offered the chance of travelling to the capital city to discover if she is Talented she jumps at it. All of her training hasn't prepared her for what she is about to face though and learning to use her Talent is the least of her worries. White was forced to run from World when his Talent was discovered and he took refuge in Angle Tar. Frith has brought the two of them together but they come from such different backgrounds that they find it almost impossible to see eye to eye and they instantly rub each other up the wrong way. Rue is supposed to be learning from White but she isn't exactly ready to listen to him, she is out of her depth and struggling to know who to trust. They are attracted to each other but both are suspicious and wary, will they be able to put their differences to one side so they can work together?

I don't want to go into any more detail about the plot so I'll just say that Fearsome Dreamer is a captivating story that had me hooked all the way through. I loved the mishmash of genres and the way the author has woven them all together to create something so unique. As the first book in a trilogy it does leave you with plenty of questions but it wasn't a killer cliffhanger like so many other books I've read recently so as much as I'm excited to carry on reading about Rue and White I'm not left screaming in frustration waiting for the next instalment. If you're looking for something fresh and different then look no further because I'm sure you'll love this story!