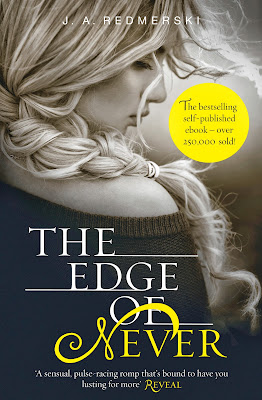 Twenty-year-old Camryn has always known that she wants a life less ordinary. But when tragedy strikes, she boards the next bus leaving town, destination unknown. On a journey of self-discovery, she meets another lost soul, Andrew Parish, who harbours his own dark secrets . . .

Andrew shows Cam what it's like to live by your own rules and how good it feels to give in to your deepest, darkest desires. But the dark shadow of Andrew's secret is looming. Will it push them together - or tear them apart forever?

Review:
Camryn has been struggling with depression since the death of her high school sweetheart and after a massive argument with her best friend she just needs to get away from it all. On impulse she packs a bag and buys a bus ticket for a random destination hoping that travelling across America will help give her time to think things through and plan for the future. It is on the bus that she meets Andrew who is travelling to see his dying father in the hospital. Cam is wary of Andrew at first but as they spend time together they grow close and Andrew helps her start to live life to the fullest again. But Andrew has a secret and when Cam finds out what it is it could leave her devastated.

The Edge of Never is another self published phenomenon that gained a huge following and has since been picked up by a publisher. I've seen a huge number of rave reviews for it so I went in with high expectations, possibly a little too high. Although this was an enjoyable story and one I'm glad I read it isn't without it's problems. The story seems to drag in the middle and I think it could have been a much more addictive read if it had been trimmed down a little, on the other hand I felt that the ending was a bit on the rushed side. There is a point where the story becomes incredibly emotional and when Andrew's secret was revealed it was like being punched in the gut but from that moment on everything moves incredibly quickly. I really would have loved more depth of how the revelation was handled by both characters and what they went through in the process, I'm sorry if that sounds a bit vague but I'm being very careful not to provide spoilers!

What I did love was how the characters took time to get to know each other before making declarations of love. I enjoyed getting to know both Cam and Andrew, seeing them spend time together and the way they became close friends. I could relate to Cam's feelings of depression and how she was struggling to see the positives in her life and I liked that Andrew helped to show her how to have fun and relax for a change. He brought the joy back into her life and helped her learn to loosen up and go with the flow which was exactly what she needed. I was also pleased that Cam was able to resolve her issues with her best friend Nat, the two of them had been incredibly close before and although Nat made a mistake I was glad that Cam was able to forgive her. Nat also showed her worth by dropping everything to be there for Cam when she really needed her.

J.A. Redmerski has a lot of skill as a writer to be able to make me care about her characters as much as she did. I believe that now she is working with a professional editor things like the issue with pacing will be much improved in future books and I'll be very interested to see how she grows as a writer. The Edge of Never works well as a stand alone but I'm happy that there is a sequel coming out soon because I like both Cam and Andrew and I'm looking forward to spending more time with them.

Source: Received from Harper in exchange for an honest review