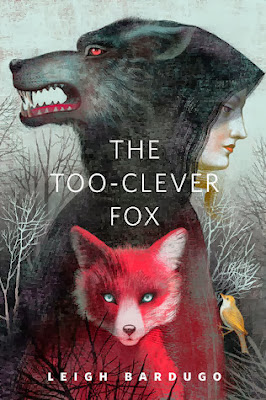 In Ravka, just because you avoid one trap, it doesn't mean you'll escape the next. This story is a companion folk tale to Leigh Bardugo’s upcoming novel, Siege and Storm, the second book in the Grisha Trilogy.

Review:
The Too-Clever Fox is a short story by Leigh Bardugo that can be read online for free at the Tor website here. The story is set in the same world as Shadow and Bone but can be read completely separately as there is no cross over of characters. It's actually a folk tale that would be told by parents to their children rather than part of the ongoing story with Alina, Mal and the Darkling although I do see a lot of similarities between Sturmhond and Koja!

This is the story of a clever fox called Koja and how he goes up against a skilled hunter who has been killing all the creatures in the forest. Koja was a great character, he was born the runt of his litter and could never be called beautiful but he uses his intelligence and charm to talk himself out of some very difficult situations. I enjoyed getting to know the other creatures of the forest too, particularly the bear. Although I had guessed the major plot twist before it was revealed that didn't stop me from enjoying the journey.

I really appreciate the fact that Leigh Bardugo has written so many free short stories that are set in Ravka, they just increase my love for this series. Each story adds more depth to the world and I hope she plans to write lots more of them because I can't get enough of the world or the characters.