Review: On Every Street - Karina Halle 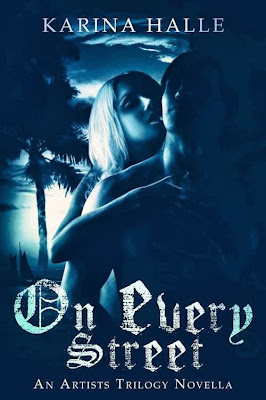 The Artists Trilogy - Prequel to Book One

When young con artist Ellie Watt decides to call herself Eden White and go after the drug lord who ruined her as a child, she never expects to fall for one of his henchmen. But Javier Bernal is no ordinary man. Subtly dangerous and overwhelmingly seductive, Eden finds herself passionately in love with Javier, the very person she's set-up to betray. With her body and heart in a heated battle against her deep need for revenge, no one will walk away from this con a winner.

This novella takes place six years before Karina Halle’s novel Sins & Needles. On Every Street can be read before or after Sins & Needles and may also be read as a standalone.

Review:
I have been hearing good things about The Artists Trilogy for months now, all of my friends who have read it haven't stopped raving about the series so now that the final book is almost available I decided it was about time I found out what all the fuss was about. Although On Every Street was released after Sins & Needles it is a prequel to the series, set around 6 years before events in the first book, and I'm glad that my series OCD insisted I start with this story because it's a fabulous introduction! I was absolutely captivated from the moment I picked up this book and I devoured it in one sitting, in fact I didn't even take a break before immediately moving on to the next one! It's been a long time since a series pulled me in as hard as this one did and I can't wait to see how Ellie's story ends.

Ellie's parents are con artists and for her whole life she was taught to follow in their footsteps, until one fateful day their actions put Ellie in harm's way and she was badly hurt by a drug dealer they were trying to con. For years Ellie has dreamed of getting her revenge on the man who destroyed her and now she is ready to put her plan into action. In order to hurt Travis she needs to get close to him so she sets out to seduce one of his henchmen, Javier, but what she doesn't realise is how hard it will be to stop her heart from getting involved. What will she decide to put first - her desperate need for revenge or her blossoming feelings for one of the men she should hate?

In a lot of ways Ellie is a strong character, it takes some balls to go out and deliberately seduce a member of a drug cartel just so you can get revenge on their leader, but when it comes to love she is incredibly naive and innocent. She sets out to play Javier but she doesn't expect him to be so seductive and is thrown by the intense chemistry between them. Javier is the kind of guy who knows what he wants and exactly how to get it, he isn't used to having anyone turn him down and he knows just how to go about making Ellie his. Javier isn't a nice guy, he's a drug dealer, a thug and a murderer, he is prepared to do whatever it takes to come out on top and he makes no apologies for that. He's actually the kind of guy that would scare the crap out of me and would have me running a million miles an hour in the opposite direction but in spite of that I could understand what Ellie saw in him. He's so cool and confident, he has no doubts about himself or his life and he certainly knows how to turn on the charm. It was easy to see why a young woman like Ellie would feel so drawn to him and why she would be unable to walk away from the passion that bubbles up between them.

Even though I'm not really a fan of Javier I couldn't look away from their relationship, it's so intense and compelling but when passion runs that hot someone is bound to get burned - especially when the relationship starts on such a huge deception. I knew all along that things would end badly but I never in a million years would have guessed what was coming, I was right there with Ellie when she had her heart ripped out of her chest and it made me feel physically sick watching her suffer. That just goes to show how emotionally invested I'd become in her story even though I hadn't fallen in love with Javier myself. I actually felt like someone had punched me in the chest and it was hard to keep breathing. On Every Street is the kind of story that sucks you in and won't let you go until you've finished reading, this is a story about obsession, addiction and desire. It's not a traditional love story, it's about flawed characters and the numerous ways they can mess up, it's about breaking all the rules, it's a dark, gritty and compelling read that you don't want to miss out on and it's the start of a series I can't recommend highly enough!