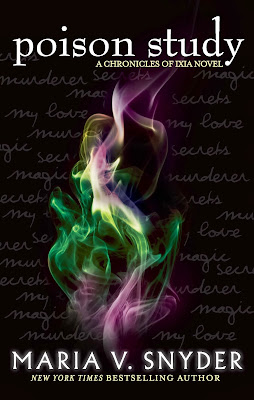 How much is your life worth?

In the territory of Ixia control is maintained through the Code of Behaviour forbidding the practice of magic, but danger lurks in mysterious places . . .

Imprisoned for murder, Yelena Zaltana's punishment is death, unless she accepts the position of the Commander of Ixia's food taster . . . and risks assassination from poison daily.

In a world where magic equals death and freedom is for the lucky few, the battle for Yelena's life has just begun.

Review:
I'm a huge fan of Maria V. Snyder's Healer series so I have been wanting to go back and read her Study and Glass books for quite some time now. I've got no idea why it's taken me so long to get to them but I'm thankful I finally got around to it because I could not put this book down. I absolutely devoured Poison Study reading right through to 8:30am because I had to know how it would end and I immediately started on Magic Study as soon as I'd finished! I loved this book so much that I think I'm going to have trouble writing a sensible review for it so I apologise in advance for any fan girl squealing that goes on in this review!

Yelena was found guilty of murder and has spent the last year in the dungeon waiting for her death sentence to be carried out. Then she is offered a surprising way out, if she agrees to be the food taster for the Commander's meals she will be allowed to live, well, as long as she doesn't end up being poisoned that is. She must learn to distinguish the many different forms of poison by their taste or smell and can only hope that she doesn't end up ingesting a lethal dose. In a world where she has many enemies Yelena must do all she can to keep her biggest secret though because if anyone finds out she can do magic then getting poisoned will be the least of her worries.

I absolutely loved Yelena, she is such a strong character, someone who has been through hell on earth and survived to tell the tale. After everything she has suffered many people would have given up but Yelena is going to take even the tiniest opportunity to live and use it to her full advantage. She is strong, independent and will do whatever it takes to protect herself. It has been a long time since she was able to rely on anyone to help her but as she finds her place in the Commander's castle she starts to make friends and learns to let people in. I didn't blame her for being wary of who to trust though and I was pleased that she was so sensible when it came to guarding her back.

The story has a fantastic cast of side characters, I loved the antics of Ari and Janco who become like big brothers to Yelena. The way the bicker with each other was hilarious but as much as they provide a lot of light entertainment they are also very protective of Yelena and go out of their way to help her learn to protect herself. My favourite side character was Valek though, he was such a complex character and it took a long time to figure out his motives. As the Commander's chief of security he is the one who offers Yelena the chance to become the new poison taster and he is in charge of her training. Valek comes across as very arrogant and sure of himself, he is a master assassin and makes no apology for the people he has killed to protect the Commander. He is the kind of guy that does what needs to be done no matter how hard it is or how much it costs him but he also has a softer, nicer side that starts to shine through when we get to know him a bit better.

The plot of Poison Study was riveting, Maria V. Snyder does such a fantastic job of building her world that it's like you've stepped inside the story and are living through the events right alongside Yelena. You are friends with her friends, you hurt when she is betrayed and you laugh when she is happy. It's been a long time since a series as captured my attention quite as much as this one has and I can't wait to start reading Fire Study!